Fox & Friends Tackles Biden’s ‘Chains’ Remark: ‘Biden Should Man Up And Say It Was A Mistake’ 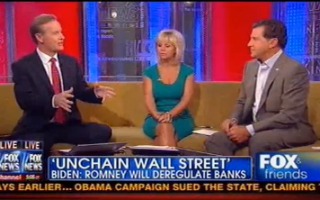 The folks at Fox & Friends took a look both at Joe Biden‘s recent comment, aimed at an audience in Virginia, that Republicans and Wall Street would “put y’all back in chains,” as well as the Obama’s campaign response to it.

“The defense, now, of Joe Biden’s people is that he was referring to the Republicans unshackling, desire to unshackle regulation that sit on the banks,” said host Gretchen Carlson. “So, that is what they are now using the defense of this whole chain analogy.” But, she added, he said this in the South — specifically in the last capitol of the Confederacy — which adds a different layer of context to his comment and the slang he used to express himself.

“The Republicans are looking for fewer regulations, not more regulations, so that defense doesn’t make any sense,” Eric Bolling added. “Also, Stephanie Cutter from the Obama campaign defended the remarks, saying ‘No, no, we’re absolutely fine with what he said.”‘ What Biden and the rest of the re-election campaign should do, he continued, is simply admit that he “screwed up.”

And, now, the hosts said, Romney is on the offensive, calling Obama’s presidency both “desperate” and “angry.”

“Honestly, Biden should just man up and say ‘I made a mistake,'” said Bolling.

“He’s gaffetastic,” said Doocy, adding that Biden has a whole lot to apologize for.

They then played a clip of Sarah Palin saying she can’t think of one prominent Republican who has said the sort of things those on the left have, as well as Rudy Giulaini‘s assertion that Biden simply isn’t very bright.

Doocy concluded the segment by shaking his head over the fact that Biden is the nation’s second in command, reminding everyone that he’d once referred to Obama as “bright,” “articulate,” and “clean”… and that he’d named the wrong state while addressing that aforementioned audience in Virginia.