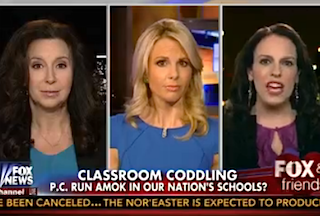 Should kindergarteners be forced to hand out the same, generic Valentine’s Day cards to every one of their classmates, whether they really love them or not? That’s the controversy that Fox & Friends took on Thursday morning one day before schools across the nation would face these types of difficult questions. “Is it such a bad thing if every child gets a Valentine’s Day card?” Elisabeth Hasselbeck asked her two guests.

“Valentine’s Day is about expressing your unique heartfelt feelings for your special loved one,” blogger Elizabeth Esther said. “To just robotically hand out, ‘Here’s your Valentine, here’s your Valentine.’ Like, what are we? It totally removes the meaning, the special memory for the kids. You can’t make life 100% fair.”

Esther expressed concern that the children would grow up to be 20-year-olds who still expected to get a Valentine from everyone they meet. “The kids who wouldn’t have gotten a Valentine,” she said, “they’re getting a pity valentine now? That doesn’t feel any better.”

On the other side, parenting expert Jessica Gottlieb argued that it “does feel better” to receive a Valentine than not, no matter the intention behind it. “The kids that wouldn’t get a Valentine, believe me, they experience rejection day in and day out,” she said. “There is absolutely no reason to be excluding them.”

Esther went on to use her kindergarten age boys as an example of kids who don’t want to give Valentines to “icky boys” and instead just want to give them to “a couple of their girlfriends.”

So, there you have it. On one side, inclusion for all. On the other, “icky boys.”