F&F: Unlike “A Lot Of Disasters,” Nashville Victims Not “Whining And Complaining” 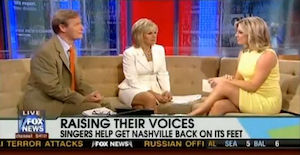 Right now, it seems like there are so many big news stories going on in the world it’s inevitable one of them would be getting the short shrift. It’s terrible though that the unenviable situation has seemingly befallen the story of the deadly flood that hit Nashville last week. With much of the media’s attention focusing on the BP oil spill, someone has to speak for the victims of the devastation in Tennessee, which is what Fox & Friends did this morning. Unfortunately, Steve Doocy decided the best way to raise the flood’s awareness would be to basically brag about how much cooler its victims are than those of other disasters.

During a discussion about celebrity-led benefits for the disaster, the conversation turned to the media’s lack of coverage and how the victims must feel left out. Doocy then made a point of defending them while, in doing so, insulting the victims of every other recent disaster.

“And even though this is a national and natural disaster of biblical proportions practically, you don’t hear any whining and complaining from those people. It’s not like, ‘Hey, will the federal government please bail us out!’ They’re doing it themselves.”

The italicized section of that quote was, of course, said by Doocy in a terrific mock-whiner voice. In his defense though, that statement alone wouldn’t be that terrible. It took Courtney Friel, Fox’s entertainment correspondent, to make the connection to Katrina for things to get really offensive.

“Friel: That’s the thing. I was talking to this guy, my source down there, about how it’s different than Hurricane Katrina-
Doocy: From a lot of disasters.
Friel: There was no looting or anything…”

Fox & Friends was doing a good thing by highlighting the charities set up to help Nashville, but then they had to go and ruin the segment by insulting the victims of previous disasters. You can compare disasters to each other, but there’s no good reason to compare the victims. Especially when you are going to compare them as if you’re comparing your favorite sports teams.

The media needs to do a better job of covering the flood. They shouldn’t, however, do it like this.