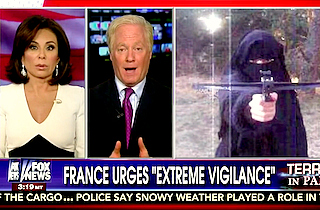 “In Britain, it’s not just no-go zones, there are actual cities like Birmingham that are totally Muslim where non-Muslims just simply don’t go in,” Emerson said. “And, parts of London, there are actually Muslim religious police that actually beat and actually wound seriously anyone who doesn’t dress according to religious Muslim attire.”

UK Prime Minister David Cameron called him a “complete idiot.” “When I heard this, frankly, I choked on my porridge and I thought it must be April fool’s day,” Cameron said.

While Birmingham does have a large Muslim population, 46% of the city is Christian, per the 2011 census, double the Muslim population. Emerson quickly backtracked on the claim after the show, saying he had “clearly made a terrible error for which I am deeply sorry.” He also promised to donate to a Birmingham charity.

Birmingham City Mosque is among the tallest and most sacred in all Islam. #FoxNewsFacts pic.twitter.com/4DPUoaz6CV

All post boxes in #Birmingham have been forced to wear red burqas. #foxnewsfacts pic.twitter.com/gUaPMs23ZR

#foxnewsfacts Minarets being constructed all along the UK coastline by ISIS. pic.twitter.com/BoGrf90UFB

Jam jars across the Britain have to wear hijab in order to be halal. #foxnewsfacts pic.twitter.com/7HD1VnG1Zn

Uncovered: Video of the extremist jihadis intimidating citizens of the sharia hell that is Birmingham. #Foxnewsfacts https://t.co/9bXj01S88l