Fox Guest Dismisses Media Pressure To ‘Get Over’ Benghazi, Blames 9/11/01 On ‘Moving On’
video

Fox Guest Dismisses Media Pressure To ‘Get Over’ Benghazi, Blames 9/11/01 On ‘Moving On’ 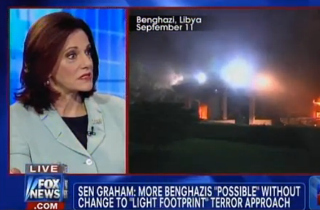 During an interview this morning, Fox’s America’s Newsroom host Martha MacCallum and Fox News National Security analyst KT McFarland went after the general media consensus that it’s time to “move on” and “get over” the September attacks on a U.S. consulate in Benghazi, Libya.

After playing a clip of Sen. Lindsey Graham (R-SC) decrying the lack of progress in investigating the administration’s response to the attacks, MacCallum lamented that “You watch these [Sunday morning talk] shows and you hear Benghazi brought up. And so often the reaction is sort of ‘Oh, get over it. Move on. Move on.'”

“Why should we not move on?” she asked McFarland.

“Well, because that’s exactly what we did in 1998 when there were twin bombings in U.S. embassies in East Africa, and in 2000, when there was an attack against the U.S.S. Cole in the region,” she responded. “It was al Qaeda. We didn’t retaliate. We did move on. Well, what happened? Bin Laden has said himself, as a result of the Americans’ failure to retaliate against us, we felt emboldened. That’s why you had September 11th.”

McFarland then noted how she believes we are doing the same thing today:

“Fast forward a decade. We have had attacks on American soil at the consulate and Americans had died? What are we doing? We are arguing with ourselves. We’re not retaliating against them. But we know where those al Qaeda training camps are in eastern Libya. Why not go after them? What is the lesson al Qaeda takes from this? Once again, no consequences. The Americans will be fighting each other, not us. I think we allow them to become emboldened, and this is a green light for continuing to attack Americans.”

MacCallum then asked “What do you think the mindset is of the administration on this? do they generally believe al Qaeda is not a threat?”

“It’s their mindset and their failure to say, ‘Gee, if these are terrorist attacks, then that’s a lie,’ because they can’t admit then that al Qaeda is bigger than ever and has spread,” McFarland said.