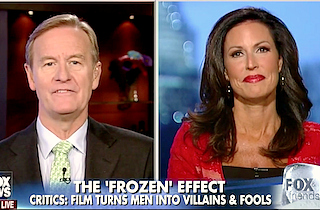 On Fox & Friends Wednesday morning Penny Young Nance, CEO of Concerned Women for America, warned host Steve Doocy that Hollywood was undercutting traditional notions of masculinity, to the point of endangering the production of “real men.”

“Hollywood in general has often sent the message that men are stupid, in the way, and if they contribute anything to the family, it’s a paycheck,” Nance said. “The question for us as moms is when we bring our daughters to see Frozen, or whatever the movie is, we often have our little boys sitting there, and is this message helpful? We want them to know that they’re essential. We want to raise heroes. We want to raise real men that will stick in their families and be great dads and be great providers and great husbands.”

Nance then tied masculinity to the Aurora, Colo., shooting, because a man covered his girlfriend during the shooting. “We don’t have to empower women at the cost of tearing down men,” she said. “We want to raise real men. We want to encourage masculinity, not villainize masculinity.”

“It would be nice for Hollywood to have more male figures in those kinds of movies,” Doocy agreed.

Rumors that men are the heroes of the vast majority cultural products and have been since the dawn of narrative went unconfirmed at press time.