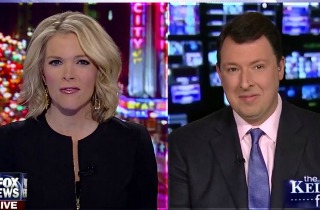 Marc Thiessen, a former speechwriter for George W. Bush, appeared on Fox News Channel with Megyn Kelly on Monday night where he was asked for his thoughts on President Barack Obama‘s decision to spend much of his interview with host Bill O’Reilly attacking Fox. Thiessen said that this was a smart tactic as part of the White House’s ongoing effort to “distract” liberals who are disappointed in the president and get them engaged in the midterm election cycle.

Kelly began by asking Thiessen about the president making Fox the focus of most of his pre-Super Bowl interview with O’Reilly as well as a tweet from former Sec. Hillary Clinton remarking on how she is usually the target of that network’s hosts barbs.

“Whomever could they be trying to rally?” Kelly asked.

“Maybe their liberal base?” Thiessen submitted.

Thiessen went on to cite polling data which suggests that the president’s liberal base voters are dispirited with this president and specifically how the Affordable Care Act’s roll-out has tarnished the image of progressive government initiatives. He added that the White House is aware of the threat posed by a disinterested liberal base heading into a midterm election year.

RELATED: Obama Doubles Down During Taped O’Reilly Interview: Fox Is ‘Absolutely’ Unfair to Me

“Picking a fight with Fox News is a great way to distract them and get them ginned up again,” he said.

Kelly recalled how in 2008 the Clinton presidential campaign was thankful to Fox News for asking tough questions about then-candidate Obama. “That’s before she presided over the Benghazi debacle,” Thiessen observed.