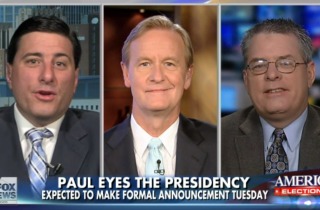 On Monday morning, Fox & Friends held a lively debate between Brad and Dallas Woodhouse, the modern (and very much bloodless) political equivalent of Civil War “brother against brother” battles.

Brad is a Democratic consultant and the head of American Bridge PAC; Dallas is a Republican strategist and founder of Carolina Rising. The siblings once reached minor fame when they were interrupted by a phone call from their mother during their dramatic C-SPAN battle.

For their joint Monday morning Fox appearance, the pair debated this very Fox & Friendsian question: “Which GOP contender has the Democrats most afraid?” And when the subject turned to Sen. Rand Paul (R-KY) — seen by GOP foreign policy hawks as too non-interventionist — here’s what Republican Woodhouse had to say:

[Paul’s] sort of worldview may not be fitting the world as a lot of people see it right now. He’s got to prove — in my opinion, Rand Paul’s got to prove that he will nuke a Muslim country if we have to. I’m not saying we should. But I’m saying we will do that if it takes saving America and that there’s no doubt that he will do what it takes to protect America.

The blog Crooks & Liars picked up on the clip and just when you’d expect the conservative Woodhouse to suggest the famously liberal website took him out of context, he followed up on Facebook with an affirmation of his views:

“Damn right I said it,” he declared. “I of course meant that Rand Paul has to win over the American (and republican primary) voters on national security. At its core the GOP is a National Security Party. Period. We are not the blame America first crowd. That is my brothers side, not mine.”

“We don’t like war, I don’t like war. We hate war,” he continued. “However we need a POTUS who will do WHATEVER it takes to protect America and her friends including Israel. I never want to see another Nuke used, but If We HAD to like in WW2 then so be it. I want a President willing to keep the option of Nuking the enemy on the table rather than letting THEM get the bomb to terrorize us and threaten and possibility destroy Israel as we know it.”

He concluded: “America First. Whatever it takes. No matter what.”

(Quick question from your humble writer: How does one *prove* you’d nuke a Muslim country? Just say it three times and it magically becomes so?)