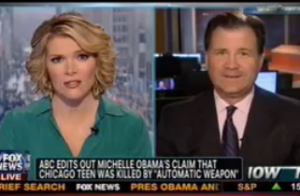 Wednesday afternoon on Fox News, anchor Megyn Kelly took on ABC’s apparent decision to edit out a controversial statement by with First Lady Michelle Obama from an interview that ran during yesterday’s Good Morning America. Did the news organization edit the interview for time, as they claimed, or were they trying to save the first lady from making an embarrassing public statement?

The quote in question from Michelle Obama concerned the recent shooting death of Chicago teen Hadiya Pendleton. During the interview that aired on ABC, the first lady simply said “she was caught in the line of fire,” but the unedited transcript posted online by ABC revealed the rest of that sentence, “because some kids had some automatic weapons they didn’t need,” which is a false characterization of the weapons used.

Kelly welcomed conservative radio host Lars Larson to give his take on both Michelle Obama’s words and why he felt ABC chose to edit them. Larson seemed to take for granted that ABC was “carrying water” for the administration’s “ridiculous policy change” on guns, but really took issue with the fact that the first lady was discussing it at all.

“What does being married to the president,” Larson asked incredulously, “how does that qualify you to start getting involved in the formation of policies that run counter to the second amendment, to the laws and point of view of most Americans?” He continued railing against her “automatic weapons” error, saying “she’s talking about something she knows nothing about and puts her ignorance on display. Then ABC decides to edit the tape so that the first lady doesn’t appear to be as ignorant as she is on the subject.”

Towards the end of the segment, Larson went so far as to imply that Michelle Obama was purposefully trying to push the idea that this murder was committed using “automatic weapons” because “her husband’s own proposal does not address pistols, which are are the deadliest thing in Chicago.”

There is an argument to be made that if the first lady is going to go on television and discuss the problem of guns in this country, she should have her facts straight. The most logical explanation in this case is that she misspoke and ABC did cut the comment for time and clarity. If they were really trying to cover up her mistake, they would not have posted the full transcript online for all to see.

But as Larson suggests, there is a larger question here about whether gun control is a topic that should be off limits to the first lady altogether. You don’t see many commentators saying she shouldn’t be discussing things like getting exercise and growing vegetables. But now that Michelle Obama wants to talk about one of the biggest threats to the country’s children, all of a sudden she’s not qualified?