Fox Guest: We Could ‘Relive’ Holocaust if Harvey Weinstein Gets His Way on Guns
VIDEO

Fox Guest: We Could ‘Relive’ Holocaust if Harvey Weinstein Gets His Way on Guns 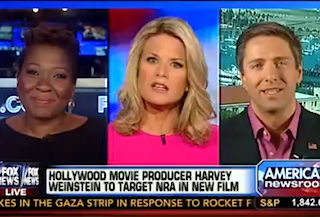 On Thursday morning, a Fox News panel took on the news that producer Harvey Weinstein is planning to make a movie about guns that will make the NRA “wish they weren’t alive after I’m done with them.” By the end of the discussion, one guest was suggesting it might lead to the second coming of the Holocaust in America.

“What do you make of a guy who made Kill Bill carrying the torch for anti-NRA?” host Martha MacCallum asked, echoing the sentiments of Mediaite columnist Joe Concha.

“More power to Harvey,” Fox contributor Jehmu Greene responded, arguing that “NRA lobbyists use responsible gun owners as human shields for the gun manufacturers, who want to get away with selling guns to criminals.”

In incredulous Mike Slater, SiriusXM Patriot host, shot back that “Harvey and his friends have built their careers on making incredibly violent movies, and they have contributed to this desensitizing to violence in America.”

The discussion continued from there, touching on the argument over whether more or less guns in the hands of “law-abiding Americans” will make the public more safe, before MacCallum brought up another part of Weinstein’s comments to Howard Stern about guns. The producer told Stern that one of the only justifications for widespread gun ownership would be “when you’re marching a half of a million people into Auschwitz” and that if the Holocaust were to happen again, “I’d find a gun if that was happening to my people.”

“He says that in Germany if only they had access to a gun, they could have stopped the Holocaust,” MacCallum said. “Well, I guess he’s forgetting the fact that their guns were all confiscated under German law at the time. So, you know, some holes in this story to be sure.”

“I saw a movie once where only the government and police had guns, the movie’s called Schindler’s List,” Slater added. “We can relive that again one day.”