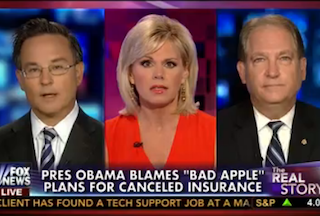 Did President Obama “lie” to Americans when he said they could keep their existing health insurance plans even after the Affordable Care Act is fully implemented? Following the president’s admission Tuesday that insurance companies could alter plans due to the health care law, Gretchen Carlson invited two ideologically opposed guests on her Fox News show to hash out who’s the blame.

Former Bill Clinton adviser Simon Rosenberg said the president was “correct” when he said that “in every case where someone’s plan is being canceled, they are being offered a new plan by the same insurer.” He added that “cancellation in some ways is not really the right term. That plan is being terminated, new plans are being offered and they have options to go on the exchange.”

When Carlson suggested that Obama “lied” to the American people, Rosenberg said he did not believe the president was dishonest, but he did admit that the change has “been a shock, and the administration should have done a better job to explain to all these people that this was going to happen.”

Former George W. Bush aide Brad Blakeman said it was all part of Obama’s “3D strategy: distort, distract and divide.” He said, “These were affirmative promises that the president made that now the American people are finding out are totally, 100% untruthful.”

When Blakeman shifted to conversation to employers who are turning full-time workers into part-time workers because of Obamacare, Rosenberg fought back. “That’s all exaggerated right-wing talking points. That’s not true. None of that is true, it’s not true.”

Carlson quickly shifted back to the topic at hand, declaring, “When a president says something for three years and it turns out that it’s not true, I think there’s no doubt that that affects the credibility. I don’t care if you’re the janitor or you’re the president of the United States, it affects your credibility.”