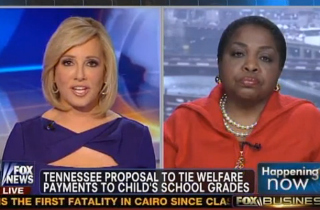 This afternoon, Fox’s Happening Now took on the Tennessee proposal to tie parents’ welfare payments to their kids’ school grades, leading to a clash between the law’s creator and a former superintendent who finds the idea to be misguided at best.

Republican State Rep. Stacey Campfield explained that the proposal will take the welfare-school connection “to the next level by saying, listen, if your kid is failing every single class because who knows what reason — unless you are a special needs child or something like that — we’re going to stop or cut back on the amount of straight cash payments you’re going to get.”

“This has nothing to do with food stamps or school lunches or anything or school-housing vouchers,” he continued. “This is a straight cash payment that the state gives to these people that are in need, but we need to stop this generational poverty.”

Guest host Jamie Colby challenged Campfield on whether impoverished parents are actually equipped to improve their children’s school grades. “Listen, I’m not expecting these kids to write the Magna Carta. ABCs, 1-2-3s — I think any parent can just about do that,” he said. “We have classes for parents. We have after-school problems if kids are having problems. We have tutoring programs up the wazoo, we have everything you’d ever ask for except for parents that are engaged and involved.”

He lamented that many parents don’t care whether their child shows up for school or falls asleep in class, so long as they continue to get their welfare check. His proposed law will “motivate these parents” to break the “generational cycle of poverty.”

Former school superintendent Jo Ann Roberts shot down Campfield’s proposal, suggesting instead that local governments should fund training programs for parents to better equip them for helping with their child’s education. “Many of these parents need help,” she said.

“The thing is, we have a lot of parents who couldn’t get a flip. We can’t get them on the phone. They don’t show up to any parent-teacher meetings,” Campfield replied. “We have to find some way to motivate those parents to say, wait a second, maybe it’s important if I talk to the teacher once a year at least or to see how my son or daughter is doing.”

“I think he needs to dig a little deeper,” Roberts responded. “If he’s targeting the parents that don’t give a flip, let that be the target population, and let’s go in there and if we have to go to their homes and get these parents. This is what we had to do in Chicago. We want to make something work, we go to the home, we find the parents. Nothing stops us from our objective of getting them engaged. Let’s talk to targeted parents that don’t give a flip. Let’s ask them what is it going to take for them to give a flip.”

And with that, Fox set the record for the most use of “Don’t give a flip” in a single segment.