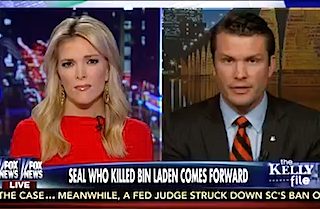 This week, Fox News scored a major ratings victory by airing an exclusive, two-night interview special with Rob O’Neill, a Navy SEAL who chose to identify himself as the man who shot Osama bin Laden. And while some SEAL commanders have criticized O’Neil for divulging classified information, Fox’s Megyn Kelly managed to find two separate guests last night who were more than willing to blame the whole thing on — who else? — President Barack Obama.

First, Kelly welcomed former Navy SEAL Jonathan Gilliam, who previously said in an appearance on CNN with Anderson Cooper that O’Neill and Matt Bissonette, another member of SEAL Team 6 who chose to identify himself, should be “prosecuted and given dishonorable discharges.” This time, Gilliam directed his criticism elsewhere.

“I don’t even really want to condemn them. That’s never been my purpose in this,” Gilliam told Kelly. “The purpose in this is that there should not even be this problem. This is a leadership problem.” When the host asked if he meant the head of the Navy SEALs, he replied, “all the way to the top.”

From there, Gilliam characterized President Barack Obama as a commander in chief who has “never even been in the military” and “doesn’t know how the military works.”

“What did the president do wrong?” Kelly asked, seeming genuinely confused by this line of attack.

Gilliam said that the whole thing goes back to Vice President Joe Biden and the secretary of defense deciding to allegedly release classified information about the attack to the screenwriter of Zero Dark Thirty, who used it to recreate the bin Laden raid in that film.

“It’s not an O’Neill problem,” Gilliam said once again at the end of the segment. “This is a leadership problem. These issues should not even exist. They should be fixed. And the leaders and the D.O.D. and in the executive branch should start setting the rules.”

In the very next segment of The Kelly File, rather than say, getting someone who holds a different view to Gilliam’s, Fox contributor Pete Hegseth joined Kelly to pile on the same Obama critique.

“I don’t put this on O’Neill,” Hegseth said, echoing Gilliam. “I put this on a White House that ran like giddy school children to The New York Times to give away every single detail they could about the mission to make themselves look good.”

He said O’Neill was “the last person to tell his story” and praised him for doing it “without divulging details.” Of course, O’Neill did describe the raid itself in great detail during his interview with Fox’s Peter Doocy the night before. “This is not on him,” Hegseth added. “It’s on a culture in the White House and Pentagon that’s devolved a lot of this behind the scenes.”

When Kelly tried to steer the discussion back to criticism of O’Neill, whose fellow SEALs say he should not be taking credit for a mission carried out by the team as a whole, Hegseth instead went off on Obama for using “I, me or my” 13 times during his speech announcing the successful raid, as if telling the American people that he directed the team to act somehow diminishes the actions that they took. For the record, the president also praised the team’s “extraordinary courage and capability.”

“This a White House and an operation that wanted to take a victory lap,” Hegseth continued. “And you see real professionals frustrated behind the scenes, because they know what they did, they know why they did it and they see other people taking credit for it.”

The arguments coming from both of Kelly’s guests seem to boil down to this: Obama and his administration officials were trying to “take credit” for killing bin Laden, so the man who pulled the trigger had no choice but to yank the attention back onto himself during an in-depth interview special on Fox News.

But that’s not how it works. As commander in chief, the president gets to be the one who tells the American people about a mission of this magnitude. As Navy SEAL leaders recently wrote in a public letter, a long-standing part of the SEAL ethos is, “I do not advertise the nature of my work, nor seek recognition for my actions.” They added, “We do not abide willful or selfish disregard for our core values in return for public notoriety and financial gain, which only diminishes otherwise honorable service, courage and sacrifice.”

Assuming O’Neill was the man who pulled the trigger and killed bin Laden, one can admire his service and thank him for ridding the world of its most notorious terrorist. But one also has to acknowledge that it is not his place to reveal himself in this way. To blame the whole thing on President Obama may serve these Fox guests’ aims, but it is ultimately disingenuous.