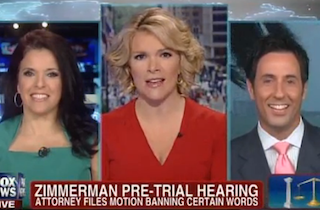 During Thursday’s “Kelly’s Court” segment, Megyn Kelly discussed the motion ahead of the George Zimmerman trial, which seeks to ban certain “inflammatory” terms. Mark O’Mara, the attorney for Zimmerman (who fatally shot Trayvon Martin last year), specified several terms — but the panelists posited he was going too far.

The terms include “vigilante,” any variation of “profiled,” “wannabe cop,” and “self-appointed Neighborhood Watch Captain.” Zimmerman’s attorney also doesn’t want prosecutors to say Zimmerman “got out of the car after police or dispatcher told him not to.” Or that he “confronted” Martin.

Last year, the case gained national attention and Zimmerman has said he was acting in self defense.

Kelly, for starters, seemed a bit incredulous, questioning how Zimmerman’s getting out of the car after being told not to could be banned since it’s relevant to the case. “I love that they’re filing the motion, but it has to be denied,” Mark Eiglarsh argued. The attorney may as well be asking prosecutors not to say Zimmerman’s guilty, he quipped.

“If you could just exclude anything that would be harmful to my client” is the motion’s message, Kelly agreed. “Isn’t that a question of fact?”

O’Mara put everything out there, but he’ll push for terms like “vigilante” and “profiled,” which are more significant, Mercedes Colwin contended.

The panel also went on to discuss whether the state can use experts to analyze whose screaming voice heard on the 911 call. Colwin felt it would be difficult to get the call excluded, but offered a few scenarios that may lead the judge to do so. Meanwhile, Eiglarsh wholly disagreed, emphatically stating that it would be included.