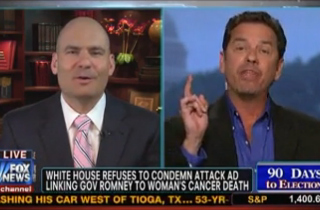 The fallout from President Obama-supporting Priorities USA’s recent ad that seemingly suggests Mitt Romney‘s business practices were partially responsible for the death of a laid-off steelworker’s wife continued today with a spirited Fox News debate. Liberal consultant Christopher Hahn jabbed further at Romney, joking that the woman would be alive if she had lived under the former Massachusetts governor’s state health-care policy. In turn, conservative radio host Christopher Plante unloaded on the ad, calling it a “flat out vicious molotov cocktail throwing slanderous lie.”

“I don’t blame Romney for her getting cancer but I blame him for her losing her health coverage,” Hahn continued. “And I think Andrea Saul said it best: if she lived in Massachusetts she would have had health-care. But I’ll take it one step further, if she had been alive in 2014 she would have health-care as all Americans will under the president’s plan.”

He then continued to unload on the ad:

The fact that anyone would carry water for this kind of filth speaks to the real issue. The real issue is not the slander, the falsehood the Democrat party is advancing. It’s the ongoing relentless maelstrom of vial vulgar slander that is being carried by the White House, by Harry Reid, by Nancy Pelosi, by the rank-and-file Democrats who go on television to carry this forward. It speaks to a dying party. And that’s the Democratic Party, which has sunk so low that they actually, with a straight face, attempt to make this argument which is beneath contempt and does not deserve a dignified response. It is so foul and so odious and so wrong and so false that my former party, the Democrat Party should come out and just apologize for the filth they are spreading around while we are trying to have a serious discussion about the economy and the millions of people Barack Obama has put out of work who are also without health insurance and are dying as we speak.

“So I guess cons are going to come out and apologize,” Hahn retorted, “for what Romney has been saying about the president and welfare reform, when he did exactly what cons want him to do: turn more of it over to the states. They come out and say he just wants to hand you a check without any strings attached. Let’s be honest here, both sides are engaged in manipulation of the facts.”

Watch the full debate below, via Fox News: