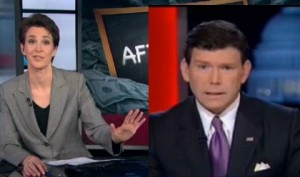 The battle between so-called “hard news” programming and “opinion” news shows is the big media debate of our time, but while media critics obsess about “bias,” fairness and accuracy are all but ignored. Case in point: Wednesday night’s Special Report with Bret Baier, a Fox News “hard news” program, completely failed at explaining a new CBO report on the just-passed fiscal cliff deal, while MSNBC “opinion” program The Rachel Maddow Show explained it quite thoroughly. Is a clearly-labeled point of view really such a liability that it’s worth sacrificing fair and accurate analysis? Is a “hard news” label more important than serving the duty to inform the public?

On Wednesday night’s Special Report, host Bret Baier reported on a new Congressional Budget Office estimate of the newly-signed fiscal cliff deal that places the price tag for the measure at nearly $4 trillion over ten years. Noting that President Obama told reporters, Tuesday night, that the measure reduces the deficit, Baier asked his panel “How is that possible?”

Some Media Matters loon might think that Baier elected to toss to Charles Krauthammer in order to avoid delivering accurate information, and provide a bridge for right-wing opinion into his hard-news program, but a fair-minded person could only conclude that Baier was simply unable to explain it himself.

Krauthammer tried, launching into a word salad about how the President “is pretending that this is an isolated increase in taxes,” and there’s an “avalanche of spending, and what’s called ‘tax expenditures,'” adding, “It’s so hard to explain, so convoluted,” but that “if you exempt population from the increase of taxes, then you vastly increase the debt, because the treasury is now starved.”

It’s actually not convoluted at all, and has nothing to do with avalanches of tax expenditures. The CBO estimate is comparing the fiscal cliff deal to what would have happened if the country went over the fiscal cliff, which the CBO also said would throw the country into recession. Technically, we did go over the cliff at midnight, Jan. 1, making the report technically accurate, but practically speaking, the fiscal cliff deal reduces the deficit from where it was headed on New Year’s Eve.

There. I did it in two sentences. The Hill magazine’s Peter Schroeder does it in a slightly wonkier three sentences:

The CBO price tag is based on a “current law” baseline, which assumes that all components of the “fiscal cliff” will take effect, which includes a wide range of automatic tax hikes and spending cuts. Neither party in Congress is seriously considered allowing those policies to take effect unaltered.

White House officials and lawmakers who voted for the bill argue the measure would raise $620 billion in new tax revenue compared to current policy.

Both Krauthammer and Democratic panelist Kirsten Powers criticized the President for supposedly adding to the deficit, leaving viewers with the unmistakable impression that Republicans were fighting to decrease the deficit in this fiscal cliff negotiation. Based on the CBO report, of course, that’s not true, because Republicans wanted to “starve the Treasury” even more by extending all of the Bush tax cuts:

There’s nothing necessarily wrong with Bret Baier asking for the clearly-labeled opinions of commentators, notwithstanding the merits of those opinions. Where he errs is in substituting those opinions for clear, accurate information.

Meanwhile, over on MSNBC, Rachel Maddow delivered her analysis of the CBO report, which included her commentary on Republicans trying to have it both ways on tax cuts and the deficit, but also clearly explained the logic behind the CBO’s calculation, and she even let Republican Congressman Darrel Issa explain it:

The key parts here are Maddow’s explanation of the effect of the Bush tax cuts on the debt and deficits, which weren’t paid for, and added more to the debt than both wars combined, while also explaining that the fiscal cliff deal is being measured against the Clinton-era tax rates. “The tax rates will go back to Clinton-era rates, right,” Maddow says, but “The tax rates will go back to what they were in the Clinton area, but only on income over 400 Gs.”

She also noted that the Republicans wanted to make all of the Bush tax cuts permanent, but that President Obama got “the Republicans to admit to that one tiny exception to making all the bush tax rates permanent.”

Rachel even let Rep. Darrell Issa (R-CA) explain the true apples-to-apples comparison, in a clip in which Issa noted “President Bush’s tax cuts were not paid for. They were anticipated to be grown out of.”

We know how that worked out. “These (extensions) are not anticipated to be grown out of. CBO has already said $3.9 trillion. In other words, $4 trillion will be added to the debt over ten years with this tax cut, unless we do some spending cuts to help offset it.”

Some parts of Rachel Maddow’s commentary are a matter of personal preference. I laughed at the analogy of the House GOP as a supermarket spill, but could have done without the gratuitous shot at the New York Jets. Conservatives might not have enjoyed, or cared about, President Obama’s second term agenda, or Rachel’s takeaway that Republicans now admit that the debt and the deficit really are all their fault. However, the crux of that commentary, that Republicans now insist that tax cuts do explode the deficit and don’t pay for themselves, completely contradicting what they have been saying for years, is fair. Crumple it up and throw it in the trash, if you like, but in my view it’s fair.

More importantly, though, a viewer of Wednesday night’s The Rachel Maddow Show would have come away knowing that the CBO’s cost estimate is based on a comparison to the expiration of the Bush tax cuts, not a continuation of current policy, and that Republicans wanted to add more to the deficit than President Obama did. Viewers of Special Report would have struggled to discern the former, and been unaware of the latter.