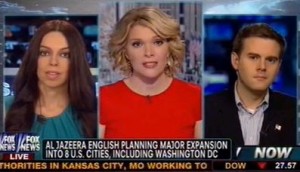 Liberal blogs are all aflutter about a Fox News contributor named Lisa Daftari burping out a chunk of crazy on Megyn Kelly‘s America Live Wednesday afternoon, with the main point being that a Fox News contributor said something crazy. What hasn’t been discussed, perhaps because they take it for granted, is that Daftari’s crazy and factually inaccurate statement about “sleeper cells” in Detroit went completely unchallenged by “hard news” anchor Megyn Kelly, who was more interested in Fairly and Balancedly talking about how Al Jazeera is “about to infiltrate America.”

This “Hard News” thing isn’t some standard that I completely made up, it was codified, chapter-and-verse, by Fox News executives, whospecifically peg the hours of 9 a.m. to 4 p.m. and 6 to 8 p.m. on weekdays as its hard news hours. Even though America Live is a hard news show, of course, there’s no rule that says they can’t also feature a “Fair and Balanced” panel (even if the two “sides” are the “Sleeper Cell” lady and a conservative radio host who “isn’t ready to jump down Al Jazeera America’s throat”… yet), but the hard news anchor who’s moderating it has a duty to police the offers of fact made during such a segment.

The segment was pegged to the creeping menace of Al Jazeera America, the network that will replace Al Gore’s Current TV in the coming months. Kelly and Company looked at some of the controversial things that Al Jazeera has aired over the years, like the time they accused the President of sharing a secret terrorist hand-signal with his wife… oh, wait, that was during a Fox “hard news” program. Well, what about that time they referred to the then-future-First Lady as “Obama’s Baby-Mama?” Wait, that was on Megyn Kelly’s own show? Of course, who can forget when Al Jazeera completely blew the Supreme Court’s ruling on the individual health insurance mandate. What? Oh, that was Fox News, too?

Well, Al Jazeera is really, really bad, and getting ready to “infiltrate America,” which is fine. Even if Fox News claims not to let any opinion into their hard news hours, Megyn Kelly is entitled to her Homeland-esque word choice, in my opinion. That is not the problem. The problem is what happens after Lisa Daftari proclaims “Detroit, Michigan is a large ex-pat community of Muslim-Americans and sleeper cells have been detected. You can Google this, you can find out all this information. So if you’re trying to set yourself apart the Qatari petro-dollars are backing this, you’re still developing in this area where the sleeper cells have been detected.”

See if you can spot it:

The most glaring failure, of course, is that Megyn Kelly fails to immediately follow up by asking Daftari for the location of Abu Nazir, or even to mention Congressman Nicholas Brody (D-SHO). Be that as it may, the news that Detroit is crawling with “sleeper cells” might just be alarming to that city’s residents, who have enough to worry about. The very least Kelly should have done, to fulfill her duty to the public interest, would have been to clarify that only one “sleeper cell” was “detected” in Detroit, despite the city’s huge Muslim-American population, I guess.

Kelly could have also clarified that the “sleeper cell” was “detected” less than a week after 9/11, and later had their convictions overturned with the assistance of the Bush Justice Department, who determined that “In its best light, the record would show that the prosecution committed a pattern of mistakes and oversights that deprived the defendants of discoverable evidence (including impeachment material) and created a record filled with misleading inferences that such material did not exist.”

Set aside the “opinion” portion of this segment, even though a decent person would challenge the clear inference that a large Muslim-American community represents a threat of terrorist sleeper cells, and just focus on the factual element. There aren’t, nor have there been, “sleeper cells detected” in Detroit, not even according to Google, and as far as our own Justice Department is concerned, there wasn’t even one.

Why does this matter? You may have noticed that I don’t do a whole lot of Fox News fisking, mainly because there’s already a whole website devoted to it, but also because I don’t watch a lot of Fox News. This clip only stood out to me because it appeared on our page the same day as another post from which I was shocked to learn that MSNBC hosts sometimes express opinions, and that their panel shows often feature panels where people say things.

I’m not sure why this is a problem, especially since MSNBC has never blocked off specific hours for hard news the way Fox has, but to the extent that it is a problem, it’s one that is easily solved. If I don’t like a news personality’s opinion, I can write a commentary about it, provide facts to rebut it, or just ignore it, change the channel. The benefit of opinion, though, is that it’s always accurate. An opinion may not be supported by facts or logic, or even common sense, but it is always an accurate reflection of the person offering it. I don’t have to care that Megyn Kelly views a news network as an enemy infiltration any more than you have to care that Ezra Klein thinks Republican policies are like medical leeches. We can choose to care, or not, although it’s worth noting that more and more people are choosing to care what MSNBC’s diverse roster thinks.

What is a problem, though, is when a news organization’s news is not accurate, because even if I change the channel, I still have to live in a country that’s run, at least partially, by people who don’t know the difference between reality and fiction. If someone on a hard news show falsely says that there’s a link between autism and mass murder, real autistic people have to live in a country where people view them with unjust suspicion and prejudice. Those “Muslim ex-pats” in Detroit have to live with members of Megyn Kelly’s audience, who now have to wonder if they’re fixing to kidnap Jack Bauer‘s daughter, or something.

Too much emphasis is placed on the mere existence of opinion in news these days, as well as the ways in which it’s expressed, rather than clear analysis of the merits of those opinions. Those are the conversations I prefer to have, but in Fox’s case, we’re stuck assessing the merits of the news in their news.