Fox Host: Kerry Should ‘Look in the Mirror’ When He Calls Snowden a Traitor 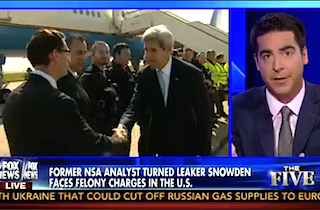 During appearances on multiple morning shows Wednesday, Secretary of State John Kerry publicly disputed comments made by former NSA contractor Edward Snowden in a new interview with NBC News’ Brian Williams. This afternoon, Fox News’ Jesse Watters, filling in for Greg Gutfeld on The Five, said that if Kerry wants to call Snowden a “traitor,” he should “look in the mirror” first.

“It is funny to hear John Kerry trying to sound like George Bush,” Watters began. “Kind of an aristocratic guy telling him ‘man up,’ calling him ‘dumb,’ it doesn’t make a lot of sense. And if anybody’s going to call someone a traitor, I don’t know if John Kerry needs to look in the mirror.”

Watters said he thinks it was “in the ’60s” when returning soldier Kerry testified at hearings on the Vietnam War (it was 1971), “accusing Vietnam soldiers of war crimes, cutting off fingers and stuff like that, he might need to look in the mirror.”

Beckel’s silent reaction while Watters was talking really said it all:

Once Watters was finished, Beckel had his turn, saying, “suggesting that Kerry is close to a traitor, this is a war hero in the Vietnam War, which itself was a disastrous, disgraceful, treacherous war.” When Watters tried to defend his comment, Beckel shot back, “You’re reaching very far out here, brother. Jesse, I don’t know what you took this morning but it wasn’t very good.”