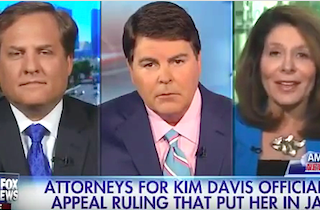 Kim Davis, the Kentucky county clerk who was jailed last week for refusing to issue marriage licenses to same-sex couples, has gotten plenty of sympathy from Republican presidential candidates like Ted Cruz and Mike Huckabee. But on Fox News Monday morning, host Gregg Jarrett and his two guests were in full agreement that Davis deserved to be jailed for not upholding the law and that her lawyer’s arguments in her defense were “stunningly obtuse.”

“When she took the job she swore to uphold the law,” Jarrett said. “We rely on government officials to do that. They can’t just pick and choose what laws they like, which ones they don’t. If they were allowed to do that, wouldn’t that lead to chaos, anarchy and so forth?”

The host and his two guests seized on a statement made Davis’ lawyer Mat Staver that implied the Supreme Court did not have the “constitutional authority” to legalize same-sex marriage.

“That’s a very polite way of putting it,” criminal defense attorney Sharon Liko told him. “I would say it’s just a ridiculously stupid statement. The Supreme Court does just that, and they determine constitutionality issues, they resolve these kinds of disputes.”