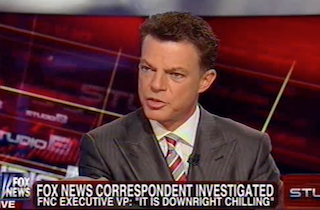 During a discussion on Monday about the Justice Department tracking and snooping into Fox News reporter James Rosen‘s personal emails, Fox News host Shepard Smith offered another, related claim. The network’s computer servers were also looked into, he told Judge Andrew Napolitano. A spokesman for the U.S. Attorney’s Office denied it.

“When they do issue this subpoena,” Smith noted, “by law, they have to tell you they’ve done it, don’t they? I mean, they went into our computer servers at Fox News, went around around our security, pulled things out, and didn’t tell us they’d done so.”

Napolitano noted that both the network and Rosen found out about it from the reports — but that the “government has an obligation to report this to the target, James, and to anybody else involved.”

William Miller, spokesman for the U.S. Attorney’s Office for the District of Columbia gave a statement to the Washington Post’s Erik Wemple, noting the Justice Department is “not publicly identifying the news organization or the reporter involved in the Stephen Kim investigation.”

He added, per Wemple:

“The search warrant obtained from the court in this case was solely for a Gmail account – housed on Google’s servers – under an alias of the reporter that had previously been used to covertly communicate with Mr. Kim. No computer servers of any news organization were searched in this investigation.”

Smith’s remark below, via Fox News: