Fox Hosts Blast ‘Arrogant’ IRS Official For Pleading The Fifth At Hearing: ‘She Looked So Guilty’ 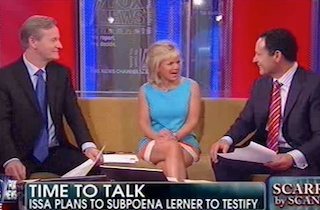 On Wednesday, Lois Lerner, the IRS’ Director of the IRS Exempt Organizations, appeared before a hearing held by the House Committee on Oversight and Government Reform and pleaded the Fifth Amendment, refusing to answer any questions — after stating that she had “not done anything wrong.” The Fox & Friends hosts on Thursday weren’t pleased with the move, arguing that it just made her look guilty.

Lerner drew protest from some members of Congress who argued that Lerner waived her Fifth Amendment rights by making statements about her innocence. On that noted, Gretchen Carlson relayed a conversation she had with Judge Andrew Napolitano, in which he called it a “serious and profound, and almost unheard of, legal error. She can now be compelled to answer questions about the substance of the denial she uttered before she invoked the Fifth Amendment privilege.”

“She said she’s telling the truth, and yet why doesn’t she tell the truth?” Steve Doocy asked. “She looked so guilty by not answering the questions.”

Carlson and Brian Kilmeade further added that the other IRS official at the hearing, Douglas Shulman, didn’t fare well either. “Everything you thought about IRS people — that they are dismissive and condescending and unwavering — that’s exactly what you saw,” Kilmeade remarked. “I never saw so much arrogance between Steve Miller, Shulman, who’s a Bush appointee, and this woman Lois Lerner in the brief time she spoke.”

Doocy chimed in that Lerner didn’t help the White House. “The last thing they needed,” he said, “was to have somebody promise to tell the truth and then look guilty.”