Fox Host’s Encounter with ‘Unwashed Masses’ Gets the Colbert Treatment 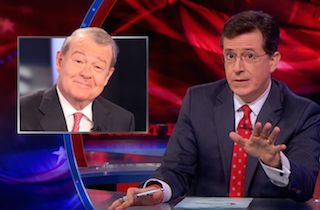 While Fox News continues to dominate in the cable news ratings week after week, it’s sister station Fox Business Network has been struggling, averaging just 54K viewers between the hours of 9 a.m. and 5 p.m. over the last year (compared to competitor CNBC’s 200K). Perhaps that’s why FBN host Stuart Varney was so surprised to meet some of his actual viewers when he recently went for a walk around New York City to figure out how the bus system works.

“There’s no one I love more on the ‘F’bizzle’ than Stu Varney,” Stephen Colbert said Thursday night. “So it hurt to see Stu and Fox Business tanking in the ratings.” The host was pleased when he found out from Varney that there’s a better metric than ratings to find out who’s really watching your show.

After playing an extended clip of Varney’s recent anecdote about meeting someone who was “not dressed like a banker” but still watched his show, Colbert commiserated: “Yes, who would have thought someone watches Stu Varney?” After Varney noted how one mango purveyor liked how he looked in jeans, Colbert agreed: “America demands more Stu Varney badonkadonk.”

“I can really identify with Varney’s tale of getting recognized by the great unwashed masses,” Colbert said, before telling his own story about recent journey through the “Square of Time” and the “district famed for its packing of meats.”