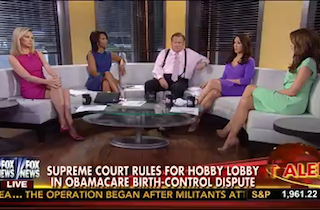 As the show’s name suggests, it was four against one on Fox News’ Outnumbered Monday afternoon, with co-host Bob Beckel as the sole voice of opposition to the Supreme Court’s Hobby Lobby decision, which will allow closely-held corporations to deny their employees contraceptive coverage under the Affordable Care Act. The rest of the hosts seemed to agree with Andrea Tantaros that the ruling represented a “huge win for women.”

Beckel, who has never been shy about his Christian belief, said he found the Supreme Court’s decision “egregious.” He said, “The idea that I would impose my values on 13,000 people is obscene, absurd and unconstitutional and the court should be bludgeoned for it.”

“They’re saying this a huge win for women,” Tantaros replied, without explaining who “they” is.

“Why is it a win for women? What about women who want to have abortions?” Beckel shot back.

Nearly in unison, the other hosts responded by asking, “What about female business owners?”

Tantaros then cited the tweet below from state senate candidate Sandra Fluke to further her point:

“That’s what the court ruled today,” she said, “that it’s not the bosses’ business what these women do, what kind of contraception these women use.” Of course, as Tantaros said just second earlier, the court is allowing businesses like Hobby Lobby to stop covering contraceptive methods of their choosing.

“I’ll be curious to see what would happen if there was a Jewish couple that started a company, 13,000 people, but they were very strong Orthodox Jews and they wouldn’t allow their employees to use electricity or drive on a Saturday,” Beckel wondered aloud, leaving the four female co-hosts momentarily speechless.