Fox Hosts Respond to Scientific American Editor: ‘Coward’ Stabbed Us in the Back
VIDEO

Fox Hosts Respond to Scientific American Editor: ‘Coward’ Stabbed Us in the Back 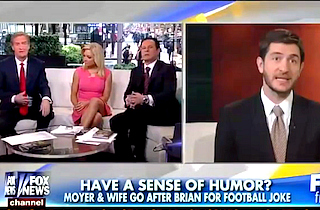 After his appearance on Fox & Friends Wednesday morning, Scientific American editor Michael Moyer tweeted that a producer had told him to avoid the subject of climate change, along with other complaints about the tone and substance of the show. On Thursday morning, the hosts of Fox & Friends pulled the old I’m-rubber-you’re-glue move, calling Moyer a “coward” to the tune of Cindy Lauper‘s “True Colors.”

“It looks like he has a problem with Fox,” co-host Steve Doocy said. “But if he had a problem, why did he come on? Clearly it was just to promote himself and maybe his magazine as well. But, you know, hashtag classy. We put him on. We have nice conversation, then he stabs us in the back.”

Co-host Brian Kilmeade was especially upset at the ribbing he took over his suggestion that there could be football on other, earth-like planets.

“I was kidding!” Kilmeade said. “I thought, if there were earth-like planets, I wondered if they might have football. I thought it was a decent idea!”

“Maybe he didn’t know how to react,” guest-host Anna Kooiman said. “Maybe he felt like a dummy.”

Kilmeade continued: “We should get up to his standard of—what’s the name of his magazine? American Scientific [sic]: No small talk; if you don’t have a good theory about the plane, don’t even talk to him; and if you have something to say about another planet, don’t bring up sports. That’s what I learned from it.”

As for Moyer’s initial complaint: “We talk about climate change all the time,” Kooiman said, noting that Moyer had instead talked about other scientific topics “that actually matter.”