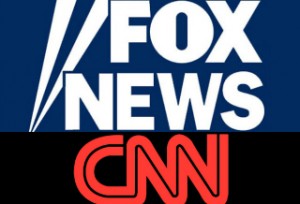 The first quarter of 2016 proved to be a historic ratings bonanza for both CNN and Fox News. For the first time in its history, Fox News beat out every other basic cable network for the highest primetime and total day viewership for the quarter. Meanwhile, CNN had its most-watched quarter in total day in seven years and best primetime since 2008.

CNN narrowed the gap with Fox News to the closest it’s been in seven years. The news network took in 732,000 total viewers and 217,000 in demo for today day; in primetime, it averaged 1,419,000 total viewers and 455,000 in demo. No doubt the non-stop (ratings rich) political theater has helped CNN accomplish this. CNN had 12 debates and town halls, while MSNBC had 6 and Fox had just 3.

In addition to the strong showings from the primetime shows, individual telecasts related to election events drew record viewerships. The Mar. 3 GOP debate was the second-highest-rated telecast in the network’s history — second only to the GOP debate the network aired in August. The Mar. 15 primary night coverage, co-anchored by Bret Baier and Megyn Kelly, gave Fox the highest-rated primary night in cable news history.