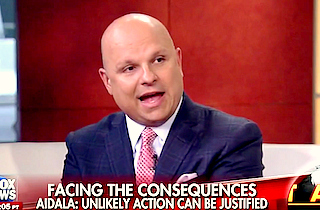 Fox legal analyst Arhtur Aidala told the Fox & Friends troika Wednesday morning that planting a weapon on a victim, as Officer Michael Slager is apparently seen to do to Walter Scott in a video released last night, used to be par for the course.

“When I was in the DA’s office in the 80s and 90s, that was standard operating procedures,” Aidala said. “Police officers — I hate to say this — would keep a second gun that nobody knew about on their ankle, so if they ever killed someone they shouldn’t have they would take that gun out –”

“That was before the iPhone and that would not be allowed,” co-host Brian Kilmeade quickly interjected. (Several state legislatures are trying to make it illegal to film police officers, but hey.)

RELATED: Fox’s Napolitano on Walter Scott Shooting: ‘This Is What People Said Ferguson Was’

Slager shot Scott fatally during an altercation following a traffic stop Saturday morning. Slager initially said that Scott had tried to grab his taser, but subsequent video showed Scott was actually fleeing, and that Slager appeared to plant the taser next to his body after shooting him.

Aidala thought Slager was done for.

“There’s going to be no sympathy for this police officer, except for the fact that it’s a 33-year-old human being who is getting paid $40,000 to protect his own life and protect everyone else’s life,” Aidala said. “Nobody thinks this cop woke up that morning and said let me go kill somebody. He made split second decisions and they were wrong. Obviously he made wrong decisions. It’s going to be about, in my opinion, how much jail time does he serve.”