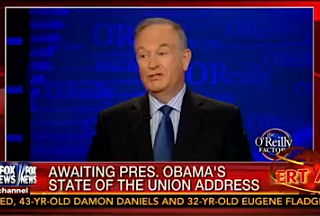 Fox News was the most-watched network by far Tuesday night during the State of the Union, drawing more total viewers than CNN and MSNBC combined. From 9:14pm to 10:20pm when President Barack Obama was delivering his address, Fox had 4.719M total viewers, while MSNBC came in second with 2.292M and CNN was third with 2.081M.

Things were a bit closer in the coveted 25-54 demographic, though Fox still took the lead with 1.198M viewers. CNN took second place in the demo with 762K viewers followed by MSNBC with 752K. Fox was also the only one of the three networks to see an increase in viewership compared to last year, rising 28% in total viewers and 25% in the demo vs. 2013.

Perhaps the only bad news for Fox lands on the shoulders of Bill O’Reilly, who predicted during his pre-State of the Union show last night that he would get more viewers on Fox than the speech itself. The readers who took our poll apparently agreed with O’Reilly, but it turns out he was wrong. The O’Reilly Factor pulled an impressive 3.575M total viewers and 698K viewers in the demo; however, those figures fell nowhere close those who watched Obama’s speech itself on Fox.

Watch O’Reilly make his prediction below, via Fox News: