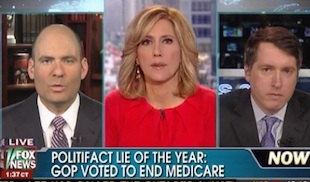 On Fox News’s America Live, Alisyn Camerota spoke with Rich Lowry and Christopher Hahn about Politifact’s Lie of The Year, the claim that ‘Republicans voted to end Medicare’, which Mediaite’s own Tommy Christopher says is actually not a lie at all.

RELATED: Politifact Editor Lies While Unveiling ‘Lie Of The Year’ That Republicans Voted To End Medicare

Lowry said while he questioned the objectivity of the website, he thought they were right on their claim.

“I don’t put a lot of stock in the fact checking outfits,” Lowry said. “I don’t think they’re as objective as they claim to be. In this case, I think they’re absolutely right, it was an obvious and blatant lie. What is Medicare? It’s guaranteed insurance for elderly people. There still would be guaranteed insurance for elderly people under the Ryan plan. It’s just the delivery of the benefit would change, but you’d still have Medicare, elderly people would still have health insurance. So this was a blatant, hideous lie but all the shrieking on the left shows you how desparate they are not to give this lie up because it’s so important politically.”

“Medicare wouldn’t end but Medicare as we know it sure would,” Hahn countered. “And that’s the difference between this being a lie and being a fact and that was pointed out in the article on Politifact.”

“Bottom line is this,” Hahn added. “(It) would be replaced by a voucher system that would not necessarily go up with the cost of Medicare, of health care going up. It would be tied to general inflation, but not medical inflation which has been substantially higher, and would go even higher on this plan. Basically, what the Ryan plan was was a giveaway to insurance companies at the expense of senior citizens.”

Camerota pointed out that Politifact had noted that President Obama had spoken truthfully about the Ryan plan.

“One Democrat who they thought was accurate and truthful was President Obama when he talked about the paul ryan plan for medicare. Let’s play this, of the one that they said was accurate.”