Fox News Analyst: Obama Gets An A- On Libya Despite Being ‘The Worst President Since James Buchanan’ 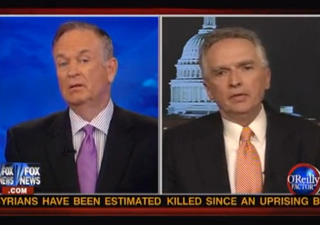 With the fall of Muammar Gaddafi‘s compound in Tripoli today, American political commentators have begun to analyze whether that fall represents a victory for the Obama administration or a victory despite them. On tonight’s O’Reilly Factor, host Bill O’Reilly asked Col. Ralph Peters to assess the President, and despite not being a fan of the President at all, argued that the removal of Gaddafi was “as good as war gets.”

Asked to grade the President on the Libya performance, Peters prefaced any evaluation with “I think President Obama is the worst president since James Buchanan,” whose talents led to Abraham Lincoln being handed a divided nation. Nonetheless, “fair is fair,” and he gave him “a strong B+, maybe even an A-” because of the speed and efficiency of the mission. “Six months was pretty quick, casualties were very low,” Peters argued.

Peters also later emphasized a major difference between Libya and some other recent Western projects in the Middle East: “it’s a very, very good thing that the rebels feel they did it themselves,” evolving from a “disorganized mob” to just enough of an organized one to take down the regime.

As for questions about what should happen to Gaddafi once in custody, Peters and O’Reilly differed– the latter preferring some sort of international tribunal, while the former would have rather him killed, “nice and clean.” With a tribunal, Peters argued, “Europeans will whine, blah blah, no death penalty for Gaddafi.”