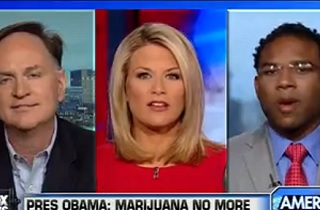 President Obama created considerable buzz (sorry) recently with his comments about marijuana, including his concern over the disproportionate rate of incarceration for minorities. In the Best Fox News Clip Ever* (*hard news division), Fox News anchor Martha MacCallum conceded the institutionalized racism in our drug laws (in the most comical way possible), but decided that the solution is to encourage black and Latino kids to smoke even less marijuana than they already do, or don’t, when compared to white people.

In a panel segment on Monday’s America’s Newsroom, MacCallum put on a veritable clinic in obliviousness. The best two minutes begin with conservative radio host Michael Graham waxing hee-larious about the munchies, telling MacCallum that “the more pot you smoke, the more you want the cookies and the ice cream.”

“It is confusing,” MacCallum continues, “as a mom of three kids, they are being told all the time, don’t drink, don’t smoke cigarettes, all these don’t-don’t-don’ts, and they might find it a little odd that the President is saying, you know, it should be legal, and it’s okay, just like alcohol.”

So, apparently, President Obama has confused MacCallum about whether her three kids should drink alcohol or smoke cigarettes.

Liberal radio host Richard Fowler then makes an unintentional funny about only having one “libertarian bone in my body.” Bone. Huh-huh.

“The reason he believes that it should be legal, and that the experiment in Washington in Colorado is a good one is that he says that minorities are incarcerated at an unfair rate compared with non-minorities who are smoking pot,” MAcCallum continues, before uttering a phrase that, if there is any justice, will immediately replace “Fair and Balanced” as Fox News’ new slogan: “And that maybe true in the numbers…”

Let that sink in for a second. MacCallum acknowledges that (in the numbers) the application of marijuana laws is unfair, but her solution isn’t to un-racist our criminal justice system, it’s this: “Maybe there should be a campaign to discourage pot use among minorities, to say that there’s a better way to make it in your future and to take better care of your body.”

Don’t reform the laws, don’t reform the criminal justice system, because institutional racism isn’t a vicious cycle; the Reefer/Doritos Nexus is. Blacks, who already smoke pot at a lower rate than whites, need to just lean into the racism.

Still, MacCallum’s suggestion isn’t completely off-the-wall. In addition to advocating for fairer drug policy, maybe the President should be telling minority kids that he doesn’t encourage marijuana use, and that smoking pot is “a bad idea, a waste of time, not very healthy.”