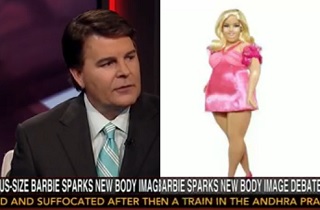 Cable news filler is a fact of life that looms larger in the holiday news dead zone, as evidenced by Fox News’ consistent coverage, this weekend, of a Barbie doll that doesn’t even exist. The network has done several segments on “Plus-sized Barbie,” a thought-provoking artist’s rendering meant to improve body image. In one such segment, co-anchor Jamie Colby extolled the virtues of the virtual doll, only to be undermined by co-anchor Gregg Jarrett, who took the opportunity to simultaneously trash Plus-sized Barbie and reality TV star Snooki.

Colby explained that the Plus-sized Barbie is the brainchild of Plus Size Modeling, which posted a photo of the potential doll on its Facebook page as a way to spark debate.

“How about this?” Colbby said. “People come in all shapes and sizes. It’s a question of body image, and now it’s a question of Barbie. It has sparked a Facebook post of a plus-size version of the famously skinny doll – I think she had, like a three quarter inch waist, the original. ”

“This one has a thicker waist and thighs, a triple chin,” she continued. “The image is one artist’s take on how a heavier Barbie might look. The post has received 40,000 likes since December 18, with comments ranging from applauding a more realistic portrayal of Barbie, to criticizing the promotion of an unhealthy lifestyle. No word from Mattel, which makes Barbie dolls.”

“Looks like a Snooki barbie, doesn’t it?” Jarrett interjected.

No, she didn’t. You were making a fat joke. Own it.

The show was then interrupted by a telephone call from the year 2009, asking if they could have their easy pop-culture target back.

The “Plus-sized Barbie” debate being sparked by Plus Size Modeling is slightly undercut by the other photos depicted on the Facebook page, most of which feature photos pf women who carry their weight much closer to societal norms than the doll they mocked up. There are a lot of beautiful women, but not a lot of extra chins. From Facebook/Plus Size Modeling:

Maybe the inclusion of the extra chins was a troll move to prompt reactions like Jarrett’s, but if they want to ask people if this Barbie can be beautiful, it would help if they demonstrated that themselves. Otherwise, they’re just replacing one standard of beauty with another.