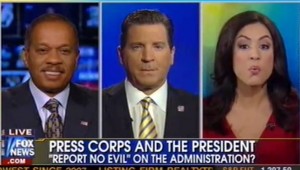 On Thursday morning’s Fox and Friends, Eric Bolling asked why bombshell revelations from the Jodi Kantor book The Obamas, like supposed tension between the East and West Wing and the Secret Halloween Party That Wasn’t A Secret, were “not exposed by the White House press corps.”

Appearing with Juan Williams, who “balanced” things out by saying Tantaros was “on target,” she went on to say “Juan and I are columnists, so we’ve been in the business. We know these reporters pretty well. A lot of them, Eric, don’t want to do the leg work. They’d rather have stories spoon-fed to them by the White House, by the Senate, or by the House, and then write them up themselves.”

She went on to accuse White House reporters of being “buddies” with this administration, and of dereliction in service of increased access.

I’m assuming she’s not talking about my friend Ed Henry, but her “lazy and liberal” descriptor doesn’t fit any of my White House colleagues. The reason we didn’t “expose” the Secret Halloween Party is that we did. There was a pool report about it. All of the drool over that story is over the fact that the White House made that event about military families, not the two (notoriously publicity-shy) Hollywood celebrities who helped make the event special for them.

As for tension between the East Wing and the West Wing, there has been some (at the staff level), but my impression is that it’s no more or less than what there has been in other White Houses. What tension there is, though, has been reported.

More broadly, the notion that Andrea Tantaros would smear White House reporters as “lazy and liberal” is just offensive. She claims to “know these reporters pretty well,” but her analysis relies on well-worn cliches spun by outsiders. Superficially, the beat does lend itself to stenography, which is what makes the beat so challenging. That’s the whole job, to get something out of this White House that they don’t want to give you. If Tantaros knew even one White House reporter, she’d know that.

The press corps is also decidedly not liberal, with the exception of the clearly-labeled “Professional Left” wing, and openly conservative reporters like CNS News’ Fred Lucas or Human Events’ John Gizzi. Take a quick gander at a website like Crooks and Liars to see how the mainstream White House reporters measure up to the liberal label. To conservatives, the absence of a conservative bias equals a liberal one.

But even those who are liberal still do their jobs. Speaking for myself, I’ve spent the better part of three years pressing this administration on issues like Don’t Ask, Don’t Tell, the awful Pharma deal, the health care reform public option, and even the White House’s treatment of the Tea Party. Liberal? Yes. Lazy? No.

The thing that casual observers don’t get about the White House beat is that it doesn’t matter what we report, or what we ask at those daily briefings, if it doesn’t get consumed. Readers, viewers, and news editors shape the perception of what we do, so we can ask 20 or 30 questions a day on serious policy matters, but if Secret Halloween Party wins, what can we do?