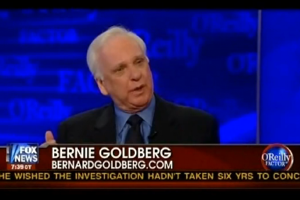 For most people following the strange, seemingly endless tale of mutual offense that is the Park 51 Islamic community center debate, it always appeared that the main debate was one of sensitivity– whether Americans were being sensitive enough to moderate Muslims in being hostile to them because others attack America in Islam’s name. Fox News contributor Bernie Goldberg frames it conversely: Why are Muslims not being sensitive enough to American values?

Goldberg was on his weekly O’Reilly Factor segment last night debating the issue and the President’s reaction to support the Constitutional right of the Islamic center to exist, something Goldberg chalked up as a nod to Gibbs’ proverbial “professional left.” He predicted that, even if the press turn against Obama for some time on this issue for not being more vocal, they will, like they did during Bill Clinton‘s impeachment scandal, come back to defend him in the end.

He also took on the imam in charge of putting together the center, Imam Feisal Abdul Rauf, calling him moderate relatively but, noting that, “not long after 9/11, this moderate imam tells CBS News that the attack on 9/11, American policies were accessories to the crimes. That doesn’t sound very moderate to me.” What’s more, Goldberg is tired of Muslims being inconsiderate about Constitutional values.

“If some mainstream Christian minister said something like that, I guarantee you the media wouldn’t call him a moderate,” he said of Imam Rauf’s comments. “It’s about damn time that Muslims around the world and in the United States be sensitive to American values.”

The clip from last night’s Factor via Fox News below: