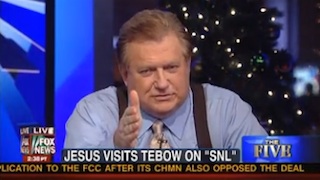 This past weekend, Saturday Night Live wrapped up their show with a sketch showing Jesus Christ appearing in the Denver Broncos locker room to tell Tim Tebow that he loves him but maybe the guy could “turn it down a notch.” Pat Robertson has already rushed to call the sketch “anti-Christian bigotry” so, when The Five opened today’s show teasing a segment on the situation, we knew someone was going to be outraged. Would it be Catholic Kimberly Guilfoyle? The (huge) Tebow fan Eric Bolling? Nope. The offended one was actually lone-liberal Bob Beckel who called the sketch “despicable.”

“First of all, it’s despicable to display Jesus Christ, our Lord and Savior, like that on Saturday Night Live and they should be ashamed of themselves. And the fact that this keeps drawing attention to Tebow and Christianity and faith and Jesus and they make it into some sort of commercial operation…there’s nothing funny about that.”

Beckel has never made a secret of his strong Christian faith and, when the others acted surprised that he was upset, he pointed out that there was no reason for distinction between his liberalism and his religion.

It was interesting to see all the other hosts be so ok with the sketch, some even liking it. It’s nice to see conservative media figures treat SNL as what it is, a sketch comedy show, and not some sinister, left-wing propaganda, conspiracy machine. Good for them. Lets see how Greg Gutfeld wrapped the segment up.

“Compare the Right and Left impersonators on Saturday Night Live. They do an impeccable job of George W. Bush with Will Ferrell. Sarah Palin with Tina Fey, amazing. Fred Armisen’s Obama is dreadful. They purposefully do not go out of their way to impersonate Obama because they think it’s insulting.”

Oh, I see. The 36-year-old mainstream comedy show is purposefully airing an unfunny impression because they don’t want to hurt the President. Right…