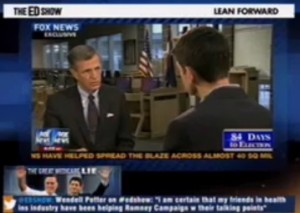 On Tuesday, CNN anchor Soledad O’Brien absolutely nailed Romney campaign surrogate John Sununu over the campaign’s outrageous lies about Medicare, then added a gratuitous double-tap today, and was called “biased” for her trouble. However, a Fox News anchor earned rare praise on MSNBC’s air for similarly nailing VP pick Paul Ryan, and no one is about to claim Brit Hume is in the tank for President Obama.

Even for the Romney campaign, their attack on President Obama for “cutting” $716 billion from Medicare is ballsier than the dumpster at a golf course. They have been accusing the President of alternately “raiding,” “cutting,” and “stealing” hundreds of billions from Medicare, when in reality, the President achieved savings in Medicare by eliminating subsidies and negotiating rate reductions from medical providers, while actually increasing benefits to Medicare recipients.

But that’s not the ballsiest part. Romney and Ryan (and Reince) have been going around making this charge even though the famous Paul Ryan budget plan uses those exact savings, or “cuts,” or “stuff Obama stole,” or whatever you want to call it. This attack is akin to slamming someone for taking candy from a baby, even as you roll out a plan to keep the candy, and cut the baby open to look for more candy.

Soledad O’Brien did a great job of dismantling this lie on Tuesday morning’s Starting Point, and was accused of bias by John Sununu (and by Noah Rothman on this site), but she backed it up with a fact-check and another several rounds with Romney campaign surrogate Tim Pawlenty. Despite having the facts on her side, though, blind partisans can still pretend the truth isn’t the truth by covering their eyes and ears, and chanting “bias!”

That’s a tougher trick to pull on Fox News’ Brit Hume, who drew praise from MSNBC political analyst Howard Fineman on Tuesday night’s The Ed Show for his dogged questioning of Romney running mate Paul Ryan on the issue of the Medicare savings. Host Ed Schultz introduced the clip, in which Hume asks Ryan “Doesn’t your budget contemplate major savings on Medicare on something of the same amount (as the President’s)?”

See what he did there? The Ryan budget uses the same savings, but spends it on tax cuts for Mitt Romney and friends.

Hume was too sharp, though, and pressed him, asking “You make savings, how much?”

Ryan parried with The Subject Change. After a pause, he said “I joined the Romney ticket. What Mitt Romney is proposing to do is repeal all of Obamacare.”

Hume kept advancing on Ryan like a hockey-masked killer. “You’re not saying, though, that you don’t contemplate in your budget plan significant savings in Medicare, are you?”

Here’s Paul Ryan’s really long way of saying yes: “We can get into the complicated baseline issues, but that’s the current law. We keep with the current law in our budget.”

The exchange not only exposed the emptiness of the Romney Medicare lie, it exposed Paul Ryan as a really bad liar, and since Brit Hume isn’t on the conservative enemies list that includes every non-Fox journalist, it’s inescapable.

Schultz asked Fineman “Can he (Ryan) continue the dodge the question all the way to November on this?”

“No,” Fineman replied, “and I think Brit Hume is a terrific questioner, by the way, I’ll tip my hat to him there. Brit knew exactly what he was asking about, and Paul Ryan was dodging and filling like crazy. And the fact is that the Ryan/Romney budget proposal on health care does the same thing. It contemplates about the same amount of savings in more efficient programs and so forth that obama care does. It’s exactly the same thing. So they now have an ad — the Republicans have an ad out attacking the President for doing exactly what the Romney/Ryan budget does. And there’s no other way around it, and Brit had him dead to rights on that.”

It’s almost enough to make you feel sorry for the Romney/Ryan ticket, except there’s a really simple way they could make this go away: stop running ads lying about Medicare.

There was a slightly ominous development later in the show. At the end of this segment, Schultz offered one of his patented text message polls, this one asking if the Romney/Ryan Medicare lies would work. While the results of Ed’s polls are usually in the 95%-5% range, this poll resulted in 82% of Ed Show viewers saying it wouldn’t work, and a whopping (relatively speaking) 18% saying it would. It appears that Ed Show viewers aren’t optimistic about the truth sinking in.