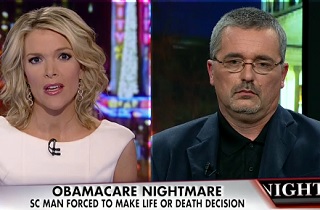 On Thursday night’s edition of Fox News’ The Kelly File, host Megyn Kelly conducted a gut-wrenching interview with a viewer named Bill Elliott, who told Kelly that he plans to forego his cancer treatments rather than pay the $1500 per month insurance premium that he’s been told it will cost him to be insured under Obamacare. Elliott also told Kelly that he was unimpressed with President Obama‘s apology to Chuck Todd earlier that night. Mr. Elliott has some legitimate gripes, but none of the information he’s been given on Obamacare is correct.

Kelly introduced Elliott as “a viewer who just messaged us on Facebook telling us that after his insurance, which covered most of his cancer treatments, was cancelled, and he doesn’t know what to do.”

“So you have been getting treated and you found out your plan was cancelled. Why do you believe it was due to Obamacare?” Kelly asked.

After thanking her for having him on, Mr. Elliott replied “I believe, because what a(n) insurance guy told me was it was beyond the catastrophic previous condition.”

That explanation was rather unclear, and Kelly quickly moved on to getting Elliott’s reaction to the President’s apology. As the interview went on, Mr. Elliott seemed to indicate that his plan was already canceled, and not scheduled for cancellation Dec. 31, like most of the people getting letters transitioning them to new Obamacare policies. It’s hard to judge based on the minimal information available here, but it’s possible that Mr. Elliott hit an annual limit on his old plan (which will be outlawed Jan. 1), and needed a new plan to cover him for the rest of the year. If that’s the case, then such a plan would be subject to preexisting condition limits and higher premiums, neither of which are the case with Obamacare plans.

It’s also possible that, like others, he’s getting a cancellation letter for Dec. 31 from an insurance company that’s trying to up-sell him an off-exchange plan. Some of what else Mr. Elliott said hints at the former, rather than the latter.

He later reveals that his old plan cost him about $170, and the one his “insurance guy” offered would cost him $1500 a month, with a $13,500 deductible. However, the most expensive Obamacare plan offered to individuals over 50 on the exchange for South Carolina is $796.87 a month, for the most expensive Gold plan, and Bronze plans in the state start at $255.35 a month. Kelly didn’t ask him, but Mr. Elliott might qualify for federal subsidies as well. For example, if he makes $26,000 a year, that Bronze plan would be $163.42 /mo., less than what he was paying before.

He also said “Now with Obamacare, the man that I’ve got looked into it, they are not going to pay for pharmaceuticals or medical devices.”

But under Obamacare, both of those categories are mandated as essential health benefits.Either Mr. Elliott’s insurance man is giving him a bum steer, or something is being lost in translation. I’ve tried to get in touch with Mr. Elliott, but have thus far been unsuccessful.

It’s possible that Bill Elliott doesn’t qualify for subsidies, which means he could pay a more under Obamacare, and this has obviously caused him great distress, distress which might otherwise have been avoided with a functioning website, but he doesn’t have to let himself die in order to relieve his family of a $1500 insurance premium. Someone really needs to let him know that.

Here’s the clip, from Fox News’ The Kelly File: