Fox News’ Chris Wallace: “You Don’t Have To Call The Other Side Socialists or Fascists” 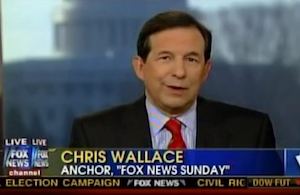 Optimists of the country take note! In the wake of the tragedy in Arizona, could it be that our nation’s leaders and media figures may actually try to turn down the hate. First people from both parties united to appreciate President Obama’s memorial speech. Then a plan was set in place to end the partisan seating arrangements that have, for years, plagued State of the Union Addresses like the awkward gender split at middle school dance (beware of bipartisan cooties!). Now, Fox News’ Chris Wallace is making the startling assertion that we should discuss the health care law without the use of terms like “socialist” and “fascist.” Whoa.

Speaking on Fox & Friends, Wallace said he supported Congress getting back to work now after the post-tragedy reprieve (something he also felt was “appropriate”) since there is a lot to work on, like health care:

However, Wallace is also a realist. He pointed to the response to 9/11 and how America truly did feel united afterwards and, yet, were right back to screaming at each other before long. He compared it to a New Years Resolution.

But this is still big news. Actually talking about the pros and cons of the law instead of just calling each other names and questioning everyone’s love for America/sick people? That’s a novel idea and huge for the optimists out there. Of course, I’m a pessimist so I realize that this just means we’re all gonna have to read the damn thing now.