Fox News Contributor: Illegal To Kill Dogs, But Not Black Kids In Florida 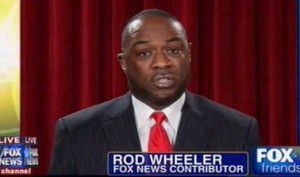 Fox News contributor Rod Wheeler discussed Trayvon Martin‘s killing in terms of Florida’s controversial Stand Your Ground law this morning on Fox and Friends, Raw Story’s David Edwards reports. Co-host Brian Kilmeade asked Wheeler about the law’s significance to the shooting. “Is the problem that Zimmerman was moving towards the victim?” Kilmeade asked. “Exactly!” Wheeler exclaimed. “Let me say something about that stand your ground law. We call it the ‘make my day’ law…What that law is saying in the state of Florida — and look at the case law — you can actually shoot a dog. It happens all the time. You can shoot a kill and dog and get arrested and put in jail, but if you kill a kid — and especially a black kid in Florida — you can walk away. That’s what that law means.”

“Do you think in the end, Zimmerman walks away, like he’s walking away now?” Kilmeade asked.

“It takes a long time sometimes to arrest people,” criminal defense attorney Eric Schwartzreich asserted. “In the criminal defense field, I see investigations that could take days, months, years. But the bottom line is he has this law. He’s asserted self-defense. He’s going to use it. Whether or not that dog is going to hunt. whether it’s going to fly, it will be up to a judge, it’s going to be up to a jury and if he believes was being attacked, he could successfully assert the Florida Stand Your Ground law.”

Watch Wheeler’s blunt analysis of the Stand Your Ground law below via Fox News: