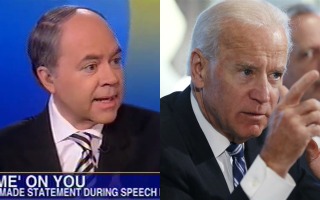 Today, the White House will sit down with video game makers to determine what role, if any, their industry plays in fostering mass shootings like the atrocity committed by Newtown shooter Adam Lanza. Some voices on Fox News Channel, who often exhibit a healthy skepticism about the government’s ability to prevent future shooting incidents with stricter gun laws, are strikingly credulous about claims that video game violence leads directly to murderous violence in the non-digital world.

“The discussion today at the White House between the White House, Joe Biden, and the video game industry is particularly important,” Johnson said. “I believe, and at least one study has shown, that video games have a pernicious, destructive effect.”

“It changes the way that our youth view guns and view firearms,” Johnson added. He said that the National Rifle Association has a vested interest in protecting video game makers because gun manufacturers often advertise their products in those games.

Perhaps that’s true, but the implication is that this condition increases violence and should be remedied. If the federal government mandated that Coca Cola could no longer be depicted in video games because it may make children want to drink sugary sodas, does anyone doubt that Johnson would find such an initiative to be a gross misuse of government authority?

This may be one of the few days when the views of Fox News Channel’s contributors and the Obama White House align perfectly. Vice President Biden will meet with the nation’s video game manufactures today as part of the ongoing summit to determine what legislative remedies for gun violence the government should pursue.

A 2010 study in the Review of General Psychology for authored by the Massachusetts General Hospital on the impact video games have on early childhood cognitive development found that at-risk youth in poorer neighborhoods actually found the depictions of violence in one oft-maligned video game franchise to be unrealistic.

In group interviews, high school-age Grand Theft Auto: San Andreas fans from poor neighborhoods felt that game violence was not realistic when judged against the real-life violence they had SPECIAL ISSUE: MOTIVATIONS FOR VIDEO GAME PLAY 183 observed or experienced (Squire, 2008). In contrast, they found the game’s references to popular culture, such as hip-hop music and fashion, to be enjoyably realistic.

The study cites further clinical analyses which found that “violent content added little unique variance to enjoyment, value, or desire for future play.” The pre-teen subjects in the study, over multiple regression analyses, found no relationship “between trait anger or aggressive personality and greater use of Mature-rated games (Olson et al., 2009).”

What’s more, it is not just possible but likely that video games are merely the latest tool for socialization – particularly among young men.

Video game play could serve as another arena for the developmentally appropriate battle for status among peers. Given that boys employ play ?ghting in their tentative moves toward relationships with girls (Pellegrini, 2003), video games might also have a role in promoting healthy boy–girl friendships.

An attraction to violent and scary themes seems to be part of normal development. Playing with those frightening images helps a child master the physical and emotional sensations that go with being afraid. Historically, that was an important and even lifesaving skill.

The study goes details at length the lack of a clinical link between video games and violent tendencies among mentally stable young adults. It is one of few studies which have tested for and identified the positive effects that video games can have on early socialization among children.

But this is just one amalgam of a variety of studies on video games and violence. Surely, as Johnson suggests, there are studies which present a more mixed conclusion. And there are – several studies have found that exposure to violent video games increased the likelihood that a subject will respond aggressively and with more hostility to everyday situations than an individual who has not been exposed to video game violence. A subject who has played violent video games is also less likely to behave in “prosocial” ways.

Furthermore, there is evidence that one does not have to be predisposed towards aggression to behave aggressively after playing a violent video game. A 2009 study in the Washington and Lee Law Review notes that a video game player may misattribute their increased aggressive responses to exogenous stimuli to external provocations and not the video games that result in aggressive behavior.

Even Dr. Crag Anderson, who has written extensively on the dangers of violent video games and the increase in violent tendencies among video game players, concedes that “media violence is only one of many factors that contribute to societal violence and is certainly not the most important one.”

So, while video games are likely to increase the incidence of hostility among players, there is little evidence that games directly result in violent tendencies. In fact, increased aggression among video game players – having been widely observed across multiple studies – leads one to conclude that game playing is even less likely to be a leading cause of still rare incidences of murderous violence.

Parental supervision remains the greatest factor in identifying a mentally unstable individual and getting them the help they need before they act out. The irresponsible behavior of Adam Lanza’s parents, and their disregard for their son’s mental health and threat he posed to others, directly resulted in his murderous rampage in Sandy Hook Elementary School. Those who seek to vilify the media he consumed are looking for an easy solution to a complex problem.

Personal responsibility is a theme that is tailor-made for conservatives. Conservatives are correctly mistrustful of the notion that increased restrictions on legal gun ownership will deter determined psychopaths from creating havoc. Why then are so many conservatives drawn to the argument that video games are even partially responsible for Lanza’s violent episode?

The debate over what legislative actions the federal government should take to prevent future Newtown massacres would be better served if conservatives were not going after scapegoats of their own.