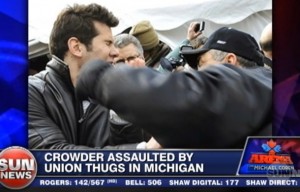 The big, splashy video to come out of Michigan protests against so-called “right to work” anti-union legislation, an that purports to be a vicious attack on Fox News contributor Steven Crowder by a “union thug,” shockingly turns out not to be true, according to Fox News contributor Steven Crowder. Although he and Sean Hannity assured viewers, Wednesday night, that the “raw video” showed that Crowder “didn’t push anybody,” the conservative comedian contradicted that fact in an interview with Canada’s Sun News.

Things got heated during Tuesday’s protests of Michigan’s sneak-attack passage of anti-union “right to work” legislation, and a tent belonging to the Koch-funded Americans For Prosperity was taken down by what appeared to be a group of protesters, and in the process, a fight between Steven Crowder and one of the protesters was caught on video.

People familiar with conservative media videographers’ penchant for misleading edits immediately smelled a rat when the Crowder clip surfaced on Youtube, edited to show the fight already in progress. Although Crowder was clearly getting the worst of the exchange, he was actively engaged in the fight, and the video conveniently did not show who struck first. Just because your shove-boxing kung fu is weaker than your opponent’s haymakers does not automatically make you the victim.

Still, Crowder addressed the issue of the edits, confirming that there is raw video that supposedly shows he didn’t push anyone, and even accused a man who said he saw video of Crowder pushing someone down of being “a liar, sir!”

However, in an interview with Canada’s Sun News, Crowder says he actually did push the protesters whom he says were “ransacking the tent.”

Crowder makes his admission at the 4:32 mark in this video:

There are many things that aren’t clear about this incident, but it is clear that Steven Crowder has not been “very honest” about this, because hepresented the video edited video to omit the start of the fight, and Crowder failed to correct Hannity’s assertion that Crowder “didn’t push anybody,” and that makes everyting about this narrative suspect. In the video of the tent incident that Breitbart.com columnist Lee Stranahan posted, you can clearly see that many union members are acting to protect the tent, and one witness even told Thom Hartmann that he saw the tent appear to be taken down from the inside, and that it was union members who alerted police and tried to rescue those trapped inside:

The “inside job” part of this man’s story is the least reliable, but Crowder’s dishonesty, and the lack of a full video, raises questions about whether the man he pushed was actually trying to protect the tent, and how violently Crowder pushed him. Hannity’s guest said he saw video of Crowder taking the man down to the ground. Whatever happened to that tent, the story that Crowder is pushing is, not surprisingly, false.

You can debate whether Crowder was somehow justified in putting his hands on that man, but by his own admission, he did, and if Crowder thinks he was blameless, then he ought to release the raw video that Hannity claims he saw, and stop letting people claim he “didn’t push anybody.”

Furthermore, every cable news show that played this video should correct the record, and think twice, in the future, about using clips from an untrustworthy source.

Author’s note: An earlier version of this post identified Lee Stranahan, who shot the video of the tent going down, as the videographer behind the fight video, as well. He did not shoot that video, he only shot the tent video. This post has been edited to reflect this, and I regret the error.