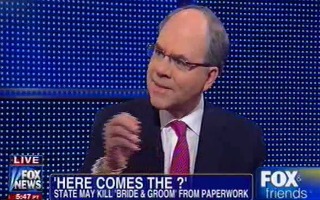 With same-sex marriage now the law in Washington state, Olympia has eliminated the terms “bride” and “groom” from their wedding license application. The terms used are now gender-neutral so as not to offend the gay couples who can now legally apply for full married status. For Fox News Channel legal analyst Peter Johnson Jr., the changes are not welcome – not because gay marriage itself offends per se, but because the elimination of those eons-old and culturally specific terms has the potential to rend sunder the fabric of American identity.

In a segment on Fox & Friends discussing the changes to Washington state’s marriage license application, Johnson said that he thought these amendments have the potential to usher in a wave of cultural animus towards all gender-specific titles.

“This is a sea change. This is a big anthropological change. This will change society and Washington and other states forever,” Jonson said. “The issue becomes, in terms of gender neutrality, in terms of saying ‘I’m a spouse, I’m not a husband or wife, I’m not a bride or groom, I’m someone about to be married’ — where does it go?”

Steve Doocy asked if the changes to a bureaucratic form in Washington state will ripple across America and tear asunder the social fabric with which we have become accustomed. “It will,” Johnson replied categorically.

When I turned 17 years old and received my driver’s license for the first time, my fragile teenage sense of identity was shaken greatly when my friends began referring to me as “organ donor.” Since no one told me that we are all defined by the boxes we check on government forms, my new moniker came as a shock.

It is a safe bet that Americans will continue to defy bureaucratic classification methods. Many will even maintain the secret, underground use of such descriptors as “husband” and “wife” or “bride” and “groom” in spite of Washington state’s cultural Dadaism.

Chances are that Americans will still be able to identify their neighbor’s gender no matter how politically correct state and federal governments become. Mr. Johnson’s hyperbolic objections to these changes in Washington state render most of his argument hollow.