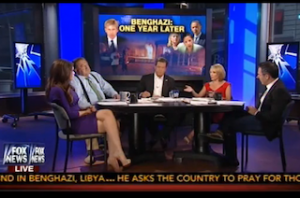 Today is not only the 12th anniversary of the attacks that killed thousands of Americans on U.S. soil, but, as you would know if you’ve been watching Fox News today, it’s also the one year anniversary of the attack in Benghazi, Libya that killed four American diplomats. Many conservatives, as well as some outspoken family members of the victims, feel that the story is not getting as much attention as it deserves. And The Five’s Greg Gutfeld knows why: It has “FNC cooties.”

After playing clips of family members speaking out (on Fox) about how the Obama Administration has let them down, Kimberly Guilfoyle said, “It’s so embarrassing. It’s so shameful. I feel horrible as an American that this is what has happened to these family members that have kindly asked for some answers, that were promised that face-to-face and still no justice, no answers.” Adopting the rhetoric of 9/11, she added, “Benghazi should never be forgotten.”

Eric Bolling agreed that family members deserve more transparency than they’ve received. “You’re ready to go kill someone in Syria on the one hand,” he said, “without all the information, but we’re a year into this and allegedly a year into an investigation, you have a lot going on behind the scenes and nothing’s happening on Benghazi.”

Bob Beckel pushed back on his “Benghazi conspiracy theorist” co-hosts, saying “you can’t call it an injustice” when you don’t know all of the facts of the U.S. investigation.

As long as she was being called a “conspiracy theorist,” Dana Perino decided to offer up a “theory” of her own. She said, “The White House has done some polling. They’ve figured out internally that the only people that care about this are on the right, so ‘we can just weather this storm and wait until it goes away.'”

Gutfeld concurred, claiming the story has “FNC cooties.” He said it’s “personal” for the mainstream media, who say “I’m not doing that story if the conservative media is doing it.” Furthermore, he added, “if the media actually followed this story” Hillary Clinton wouldn’t get the 2016 presidential nomination. “But they’re not going to follow it, so she probably will.”