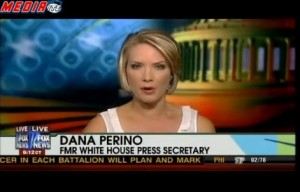 Last week, we called out Fox News’ Dana Perino (among others) for spreading a British newspaper account that gave misleading information about a diplomatic letter that was sent to the Scottish government regarding the release of the Lockerbie bomber. Much to her credit, Perino apologized on the air this morning, and in doing so, said she was “glad there’s a website out there that can track my every move and keep me honest.”

While I’d like to think she means us, it appears Dana Perino more likely was giving props to Fox News watchdog Media Matters.


Perino’s apology is spot-on, but even better than that is her now-clear-eyed analysis of the story. She talks about how, in her own experience in the White House, diplomatic correspondence of this sort is rarely carried out in public. That mirrors the Obama administration’s explanation that this letter was only made public to refute the inaccurate reporting of the British press, and by extension, Perino. Normally, the White House tells me, this kind of letter is never made public.

Perino may have been a tad sarcastic in her veiled praise for Media Matters, but hers is exactly the right attitude to take. All too often, when a media figure gets called out, the tendency is to point the finger elsewhere. It was refreshing to hear Perino own her mistake, and thank those who pointed it out.

There will be some who will note that her apology comes a week late, but I think it works out better that way. She’s speaking to the same audience who heard her initial report, and the distance from last week’s story gives the apology some air of its own to breathe.