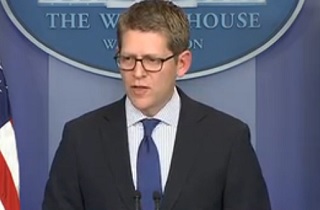 The mainstream media’s coverage of the Affordable Care Act has been focusing, of late, on President Obama‘s oft-repeated assurance that, under the new law, “if you like your plan, you can keep it.”

At Monday’s White House daily briefing, Fox News’ Ed Henry went at that assertion from a new direction, claiming that insurance companies were being forced to change plans, grandfathered in from before the law took effect, by the Affordable Care Act.

To laughter from Press Secretary Jay Carney, Henry continued, “So, insurance companies say they’re making these changes because they’re being forced by the new law…”

“No, no, no, no,” Carney interrupted. “I’m seeing some heads shake here, because that represents a fundamental misunderstanding of the…”

“You have new requirements,” Henry continued, “for insurance companies to include all of these different things in the policies that were not included before, so to comply with that, they’re sending out cancellation notices.”

“Why these individuals have gotten notices,” Carney began, “is because if they had any insurance at all in the individual market before the law was passed, which is the only universe we could adjust at the time because we couldn’t transport ourselves into the future, it’s because their insurers cancelled their plans and issued them new ones, almost invariably downgraded plans, in the interim. So, the fact is, there is a provision in the law, for a reason, that grandfathers those plans, and the people attached to them, if they want to stay with them, from  prior to the passage of the law, going forward.”

“But if the insurance company changed the plan in the interim, by reducing coverage, then it doesn’t get grandfather status, any more than a new plan introduced a year ago that was substandard and had caps, and prevented you from getting benefits in hospitalization, or anything like that, would meet the minimum standards of coverage that the Affordable Care Act provides.”

Carney did concede that “We need to do a better job of getting the facts out to that universe of the American population that is looking for answers.”

The provision that Carney was referring to allowed insurance companies to raise copays and deductibles by more than 15% per year, and still keep their grandfather status. Obviously, a law that carves out exceptions can’t be blamed for failing to allow for those exceptions, but in requiring companies to provide essential health benefits and consumer protections, Obamacare does set up a choice for companies. If a law allowed car companies to sell cars without brakes to certain customers, but not others, they might just decide to put brakes on all of their cars rather than deal with the headache, but the decision would be theirs, not the law’s.

Here’s the clip. from The White House: