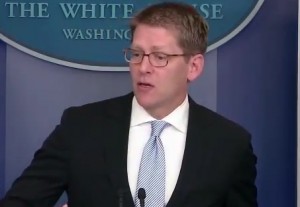 Even though President Obama‘s campaign has moved on (for the moment) to Mitt Romney‘s record as Governor of Massachusetts, the mainstream media aren’t done trying to frame the debate about Bain Capital. At Monday’s White House briefing, Fox News’ Ed Henry drew a foul from Press Secretary Jay Carney when he voiced the popular media narrative that the President is demonizing private equity firms, while also taking campaign contributions from them.

Any voter should be disturbed at the way everyone, including a whole mess of Democrats, leapt to the defense of Bain Capital when President Obama challenged Mitt Romney’s specific (and spurious) claims of job creation, except the mainstream media has largely gone along with this narrative. Even as every single critic of the President’s Bain strategy admits that it’s central premise, that private equity is not about job creation, is absolutely correct, the media have largely played along with the notion that the President is “attacking free enterprise,” and that his raising of campaign funds from the private equity industry is somehow hypocritical.

Both premises were easy to dispose of, and were disposed of by Carney and Vice President Joe Biden, but the narrative persists. This is what plutocracy looks like, a nation of leaders quaking at the thought of displeasing their benefactors.

Even though the President’s campaign has shifted gears for the time being, Fox News’ Ed Henry tried to get one more bite at the apple yesterday. Carney flagged Henry for trying to put words in the President’s mouth, and added one crucial element to his previous response on this question: (transcript vie The White House; emphasis mine)

Ed Henry: Jay, you gave an impassioned case there about private equity a couple moments ago, how about it doesn’t really prepare you for the presidency. It’s all about profit, et cetera. Why then is the President raising money at a hedge fund manager’s home in New York tonight?

MR. CARNEY: Well, I wasn’t aware that any of them are running for President, first of all, Ed.

MR. CARNEY: No, no, Ed. Those are your words, okay. I never said that and you know it, and neither did the —

Ed Henry: You said it’s all about profit.

MR. CARNEY: And there’s nothing wrong with profit, and you can be — you can succeed very well in the field by maximizing profit. That is the goal. The point is simply that job creation is not the goal. Job creation is incidental. Whether it’s massive layoffs or some job creation, either way what matter is maximization of profit. And the point simply is that that is not the approach that best informs the decisions that a President would make when he or she is trying to maximize job creation in this country, maximize economic growth.

Ed Henry: So why is he spending time with job creators tonight?

Another approach would be to support a candidate financially or support a super PAC enormously with great amounts of financials, knowing that you’re essentially buying tax relief, that victory in that case would result in a windfall. That’s I think a different approach, and it’s not the one that’s being taken by the supporters of the President.

This isn’t a shot at Ed, he didn’t make up the narrative, he was just trying to shake something loose, and he did. The hypocrisy argument falls apart simply by virtue of the fact that the President’s donors aren’t running for president, whereas Romney is, and the President wasn’t attacking private equity, only the notion that it qualifies you for the presidency.

But it doesn’t explain what’s in it for the guys who are donating to President Obama (as Carney notes, it’s fairly self-evident what’s in it for Romney’s billionaires). The fact that the President enjoys support from some in the financial sector does speak well of them, but not because they’re some cadre of generous Santas Claus or Robins Hood. Achieving a modicum of balance actually is in their own self-interest.

While Romney’s supporters seek the immediate reward of huge tax breaks and subsidies for themselves, some recognize that this approach is not in their own long-term self interest. They recognize that by taking this huge dividend now, they will be crippling two of the three legs on which our economy stands. Income inequality isn’t just bad because of some schoolyard notion of fairness, it is a very real disaster for American business because it is starving the goose that lays their golden eggs.

Yes, businesses employ people, but they rely on those same people to buy their stuff (that’s called “demand”). When businesses panic and hold onto more and more profit, rather than hiring (or funding government hiring through reasonable taxation), or ship jobs overseas to eke out some more profit, they cripple their own base for demand. Ironically, the people who have the most influence over our economy, the workers and consumers, have the least influence over our electoral politics. It’s like Superman being bossed around by Aquaman.

In the end, the goose will either get better, die, or turn on its owners, and trust me, you don’t want to mess with a rabid goose.