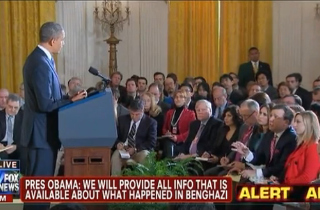 During his first presidential news conference since June, President Barack Obama was grilled by Fox News White House reporter Ed Henry over whether he believes he has a “mandate” on a wide range of issues, and whether he issued any orders to attempt to protect the lives of the four Americans who eventually died in the September 11 attacks on the U.S. consulate in Benghazi.

Henry followed up on Jonathan Karl‘s earlier question about the terrorist attack:

I wanted to ask about the families of these four Americans who were killed. Sean Smith’s father Ray said he believes his son called 9-1-1 for help and they didn’t get it. I know you said you grieve for the four Americans, that it is being investigated, but the families have been waiting for more than two months. So I would like for you to address the families, if you can: On 9/11, as Commander-in-Chief, did you issue any orders to try to protect their lives?

The president then went on to chide those who question whether the government did enough to help the besieged American citizens in Benghazi: “If people don’t think that we did everything we can to make sure that we saved the lives of folks who I sent there, and who were carrying out missions on behalf of the United States, then you don’t know how our Defense Department thinks or our State Department thinks or our CIA thinks. Their number one priority is obviously to protect American lives.”

Henry tried to follow up but the president continued on to say that “I can can tell you that immediately upon finding out that our folks were in danger, that my orders to my national security team were do whatever we need to do to make sure they’re safe. And that’s the same order I would give any time that I see Americans are in danger — whether they’re civilian or military — because that’s our number one priority.”

The president then addressed Henry’s question about whether he believes he has a mandate from this year’s election:

He then went on to acknowledge that despite his electoral victory, “I don’t presume that because I won an election that everybody suddenly agrees with me on everything,” adding that the American people are asking for the “better government” they deserve, and which can currently be seen in the “fast and robust” response to the hurricane damage along the east coast.

Aside from Karl’s and Henry’s Benghazi-related questions, the rest of the press conference did not address the September 11 attacks.