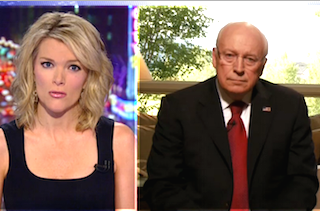 As of this week, Fox News will have completed 50 consecutive quarters as the #1 cable news network on television. To mark the occasion, Fox’s executive vp of programming Bill Shine spoke to The Hollywood Reporter about what makes the network so successful compared to its competition. Shine highlighted the decision to bring Megyn Kelly to primetime last fall and referenced her recent interview with former Vice President Dick Cheney as evidence that Fox is more “fair and balanced” than its critics give it credit for.

“I think it shows who Megyn is,” Shine said of the interview, in which Kelly sharply challenged Cheney on Iraq. “She’s a great broadcaster and she’s a great journalist. I think it also shows some of our competition and some of our skeptics what we do over here. I always say a lot of people who don’t like us, don’t watch us.”

Kelly’s confrontational segment with Cheney drew praise from several prominent liberal commentators, who rarely, if ever, have anything positive to say about Fox News. Glenn Greenwald praised Kelly for posing “tough and uncomfortable questions” to Cheney. Chris Matthews said she “keeps earning her spurs as a journalist.” Even Jon Stewart was impressed.

Shine told The Hollywood Reporter he thinks Kelly is a figure that can help counter the right-leaning reputation Fox News has developed over the years. He also sees increased attention on the 2012 attack on the U.S. consulate in Benghazi, including Hillary Clinton’s decision to write about it in her book, as vindication for Fox’s intense coverage of it over the past two years.

“What we heard for years was that it was not a real story — four dead Americans, including the first U.S. Ambassador in a generation — but as soon as the Secretary’s book came out, it was enough of a story for her to devote an entire chapter of it,” Shine said. “And at the beginning of the book tour, all of the broadcast journalists were basing the news around the Benghazi stuff. It is kind of ironic and humorous for a story that apparently was not important and only being pushed by Fox to end up being so significant in terms of newsworthiness.”

Read the full story at hollywoodreporter.com.

Watch Kelly’s interview with Cheney below, via Fox News: