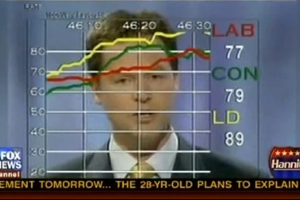 With the UK’s left-wing Labour Party in steep decline, Sean Hannity had pollster Frank Luntz on his show last night to discuss how the political landscape overseas could relate to the 2010 midterm elections. Luntz suggested that “it happens first in Britain and then comes to America,” which means this era of unprecedented polarization will lead to a massive victory by… the centrist party?

Hannity opens with the news that the next UK Prime Minister could very well be a conservative, although in reality the story of these elections is that the Liberal Democrats, a center-left party that hasn’t been competitive in decades, is flirting with the lead in most polls or barely taking it in others, a shift that Andrew Sullivan has been chronicling very closely. Granted, the Tories are neck-in-neck with them and the decline of the Labour Party is a massive story for the right, but this isn’t exactly Hannity’s definition of “conservative victory.”

That said, Luntz did provide some lessons to the Tea Party movement based on his live-reaction polling of debate rhetoric. Fear of the future isn’t landing Gordon Brown any votes, but running on change isn’t helping Tory candidate David Cameron, either. Compared with these two, Lib Dem leader Nick Clegg‘s positive polling– a reaction, Luntz argues, to his outrage– is that much more significant, and indicative of the attitude that will win elections here in November.

Hannity suggests that the key to victory for the Republican Party in November is an emphasis on specific policy changes, which Luntz politely refutes. The Lib Dems, he argues, are winning because their “hostility towards the economic system is hot,” and boring the public with policy is a surefire way to lose support, as has been happening to the right wing in Britain. Hannity’s conclusion from this, of course, is that “this is evidence that what I’ve been saying is exactly right.”