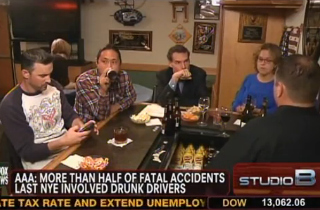 A Fox News segment on Monday allowed its on-screen participants to act out their inner Hoda Kotb and Kathie Lee Gifford by getting wasted on national television.

The segment by Fox News LA correspondent William La Jeunesse addressed various drunk driving myths — in light of New Year’s Eve being particularly drunken and dangerous — all while featuring a group of bar-goers (including La Jeunesse himself) getting hammered, slurring their speech, talking loudly about it, and then testing out pocket breathalyzers.

The Fox reporter and his merry band of drinkers downed what they claimed to be between 6-8 glasses of wine, 8 beers, or 10 Jack & Cokes. One guy brags that he had thirteen glasses of… vodka? Or something? Drunk people.

La Jeunesse, seemingly poised despite his self-described slurred speech, asks a local police officer (NARC!) about whether a cold shower or coffee is actually the antidote to drunkenness. As one dude nursed a Coors Light, the officer dispelled other myths like the one about bigger people being able to handle more alcohol (tell that to Mr. “13 Vodkas” over there).

The drinkers then tried out some breathalyzers to see if they’d pass the legal limit. Highlighting how your blood-alcohol level continues to rise well after you’ve finished your last sip, one volunteer shouts in disbelief, “Come on! I’m hammered,” when faced with her breathalyzer result .01 percent below the legal limit.

As they giddily blew into a variety of tubes and winked at the camera, the participates also drunkenly discovered that store-bought breathalyzers can be quite unreliable.

And the segment ended with well-worn PSA commentary from one of the glassy-eyed drinkers: “There’s no winners. Everyone’s a loser. When you drink and drive, you lose.”

Kudos to La Jeneusse and his producers for thinking up such a fun, hands-on way to make such a generic point.

Watch the fun below, via Fox News: