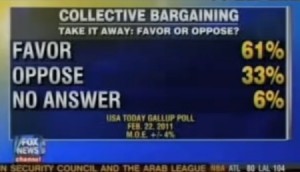 Wednesday morning’s edition of Fox & Friends featured co-anchor Brian Kilmeade misreporting Gallup poll results by claiming that 61% of Wisconsonians favor restricting collective bargaining rights. Turns out that the actual poll says the opposite. Kilmeade later claimed it was an honest mistake, but regardless of the truth, it’s certain to give ammunition to those who agree with Wisconsin protesters who recently interrupted a live Fox News report from the state capital with shouts of “Fox Lies”.

The protesters in Wisconsin received an earful from Fox icon Bill O’Reilly for shouting down Fox reporters with chants of “Fox Lies!” and, several days later, “Tell the Truth!”

But as the following clip demonstrates, reporting on poll results that are actually the reverse of the truth (particularly at time of such scrutiny) adds fuel to the bonfire of criticism of Fox News:

Much later in the broadcast, toward the end of the show, Kilmeade told viewers that he wanted to “correct a poll that we did about 22 minutes ago from Gallup. 61% oppose taking collective bargaining away from those people in Wisconsin, 33% in favor. I had it reversed. I apologize.”

So in this instance, did Fox News “lie,” simply fail to tell the truth, or was it a far more innocent mistake? Media Matters‘ Ben Dimiero makes an obvious, but important, point:

Now, it’s possible that Kilmeade’s butchering of the poll results can be chalked up to his inability to read a poll or misspeaking.

However, it wasn’t just Kilmeade who “had it reversed.” Fox News had a graphic ready to go that repeated Kilmeade’s distortion, suggesting that this misrepresentation was premeditated by the network…

The use of the graphic is damning, but it’s a bit of a reach to claim it suggests “premeditation.” Occam’s Razor (the notion that the simplest answer is often correct) would suggest that a lone producer got the results wrong, and is responsible for both the incorrect graphic, and the incorrect report. This incident does, at least, suggest the possibility that ideological blinders contributed to an otherwise honest mistake. Such a possibility (fairly or not) is sure to be exploited by Fox News detractors.

Demiero goes on to remind readers of the raft of internal documents that Media Matters has turned up, which show that, at best, Fox & Friends is susceptible to framing issues in a way that seems politically beneficial to the right. To purposely misreport the facts, though, is a very different beast than that what has been suggested in the leaked Sammon memos, which focused far more on language and word usage that framed controversial issues with what some saw as a clear ideological bent.

This wasn’t even the first statewide poll on the subject, and the earlier poll showed 74% opposed to ending collective bargaining. Despite transparent methodology, many chose to ignore the poll because it was commissioned by a union. Then, the Gallup poll came along and largely confirmed those results. Could Fox & Friends have missed both of those polls? Certainly, but at that point, it becomes difficult to decide which is worse, ignorance or dishonesty.

In any case, as James Watt once said (though he probably stole it from Oliver Willis), a lie gets halfway around the world before the truth can get its boots on. Kilmeade used the poll to stop Democratic strategist Robert Zimmerman‘s argument dead in its tracks, and the diminutive correction did nothing to unring that bell.

Of course, corrections are often, and famously, given short-shrift, confined to the middle pages of newspapers, or hurriedly rushed-through after a commercial break, but not always. As SE Cupp and I noted on her Monday show, Rachel Maddow has a reputation for issuing thorough, full-throated corrections on occasion, although she has yet to respond, on-air, to Politifact’s recent debunktion of her Wisconsin budget claim.

Finally, these poll results lead me to the same question I’ve been asking myself since these protests in Wisconsin began. If Cheeseheads are such staunch supporters of unions, and of worker’s rights, how the eff did all of these Republicans get elected in November? Where was all of this support on Election Day?

If there’s a lesson to be learned from all of this, it’s that elections have consequences, and when someone tells you that everything you care about is at stake, you better believe it.